This month, we learn how to leave the calories out of fine chocolate, and discover the earth might be older than we thought

0.39 – A molecule that can bind and re-solubilise mis-folded proteins in the eye has been identified by researchers in the US. The molecule – a sterol – shows potential as a non-surgical treatment for cataracts – eye drops containing it were able to partially reverse cataracts in mice and restore some transparency in isolated human lenses. – Eye drops show promise treating cataracts and even reversing damage 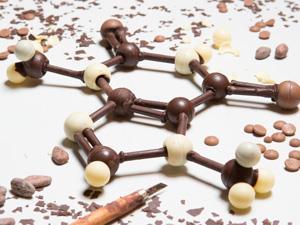 2.45 – The European Chemicals Agency (ECHA) has begun to ask companies to demonstrate that they have carefully considered using alternatives to animal tests before submitting test proposals under EU regulations on registration, evaluation, authorisation and restriction of chemicals (Reach) – Advancing animal testing alternatives

5.48 – Aneesh Popat is a maths graduate and philosopher who now devotes his time and mind to the study of chocolate. We spoke to him about creating chocolate emulsions, and chocolate creating emotions. He also told us how to make chocolate that doesn’t make you fat – Well-tempered chocolate

12.40 – A key class of biological molecules neglected in the search for life’s chemical origins could have appeared spontaneously before organisms, UK scientists say. Lee Cronin and colleagues have identified direct, simple approaches that they feel suggest that peptides could have formed much more easily than previously imagined before life was established on Earth – ‘Chemical search engine’ backs alternative route to life

15.17 – Life on earth may have begun millions of years earlier than previously thought, claim researchers who have measured the carbon isotopes of graphite preserved in a 4.1 billion-year-old mineral. – Ancient graphite may push start of life back by 300 million years

18.00 – Analytical chemist Kirsty Penkman spoke to us about dating cavemen. No, not in that sense, but rather dating when they lived. When does carbon dating work, and is the rate of racemisation of ancient protein predictable? – Dating the age of humans

25.10 – We celebrate the 100th edition of Classic Kit, with a look back on Andrea Sella’s favourite experimental kits, including Lovelock’s detector and Büchner’s funnel – Six of the best from Sella