Ancient scrolls roll back first use of metallic inks by centuries 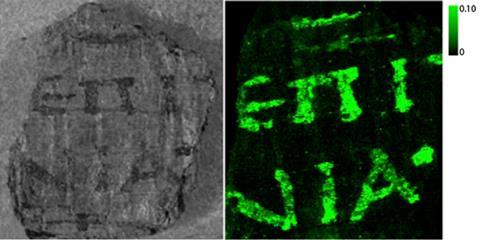 Mapping the fluorescence of a sample half the size of a postage stamp, the research team found large amounts of lead in the

Traces of metallic ink in burnt papyri from an ancient Roman coastal town destroyed in the Mount Vesuvius eruption of 79AD are set to change the history of the written word. Most historians believe ancient scholars only started using metallic inks towards the end of the Roman Empire but this discovery puts the first use of these inks back by over 400 years.

Sharing the same fate as Pompeii, the town of Herculaneum has provided historians with a well-preserved microcosm of Roman life. The town remains surprisingly intact, with tourists free to roam its streets and gaze upon its frescos and architecture.

Herculaneum is also home to the only surviving library of antiquity, where in 1754 excavators found hundreds of charred papyrus scrolls. Several of these scrolls were gifted to Napoléon Bonaparte in 1802 by the King of Naples. The gift was believed to have been an effort to appease the French leader and head-off any planned invasion of Italy. Last year, Vito Mocella and his colleagues from the National Research Council’s Institute of Microelectronics and Microsystems in Italy obtained these blackened artefacts from France. The team then set about trying to read the seemingly inaccessible contents without unrolling them. To do this the team needed to enhance the contrast between the carbonised layers and chemically similar ink.

‘When we started working on the Herculaneum papyri, we assumed that the inks were carbon-based,’ explains Mocella. A valid assumption given the historical record shows Roman authors, such as Pliny the Elder, who died trying to save people during the eruption, produced their inks from a mixture of soot, natural gums and water.

Mocella’s group exposed the scroll to a series of x-rays at varying depths, rotating the sample through 360° to build up a 3D image. As the refraction of the beam depends on the material it passes through, the team could discern between the ink and underlying papyrus – a process known as x-ray phase contrast tomography (XPCT). They captured several Greek letters within the rolls.

Since their discovery, Mocella’s team has been looking at ways to improve the contrast. Given the similarity between the charred papyrus and ink phases, the contrast can only be enhanced so far. But relying on historical records to surmise the inks are carbon-based may be what is limiting XPCT. ‘After [the] first experiments we asked ourselves, “is this correct?”’ comments Mocella.

By obtaining more accurate data on the inks’ chemical composition the team should be able to improve the contrast of the images generated. To get this information, the team focused on two papyrus fragments half the size of a postage stamp. Using an x-ray source at the European Synchrotron Radiation Facility in Grenoble, France, Mocella’s group scanned a beam across the samples and constructed a fluorescence map.

One element in particular was illuminated through the charred papyrus. ‘We were surprised the inks are not simply carbon-based, but there is a good percentage of lead,’ says Mocella. The team estimate the lead concentrations as high as 84µg/cm2 in the ink lines of one of the fragments.

Mocella is confident such high levels cannot be accounted for by lead contamination in water or pottery, a known issue in Roman society. ‘This is not believable – it’s too high,’ contends Mocella.

The team posit a number of theories for the use of lead in these inks, be it as a simple pigment or binding agent. But regardless of its intended use, the history of inks in ancient writing may have to be rewritten. ‘Up to now scholars were confident that inks become metallic only starting from the fourth century [AD],’ says Mocella. ‘From a historical point of view we backdate over four centuries, at least, the presence of metallic ink.’

Given lead’s propensity to absorb x-rays, it will make these inks easy to detect using conventional contrast tomography, according to Graham Davis, an x-ray tomography specialist from Queen Mary University of London, UK. ‘I would say this is a very exciting move,’ Davis tells Chemistry World. ‘It opens up the prospect of potentially being able to read what’s written there.’