Anton Toutov: The power of potassium 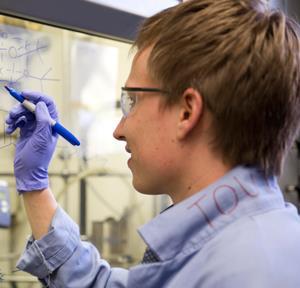 Anton Toutov, a fourth year graduate student at the California Institute of Technology, US, who led an effort that uncovered a way of producing silicon-containing organic chemicals without having to use rare and expensive precious metal catalysts, was supposed to be a mathematician. Both of his parents, uncle and several grandparents are mathematicians.

From an early age, Toutov – an only child – planned to become an actuary or something else very quantitative, but after being properly introduced to organic chemistry his second year at Queen’s University in Kingston, Canada, he was sold.

‘I was done with math,’ the PhD candidate tells Chemistry World. He says it was the ‘ethereal, intuitive’ character of organic chemistry that was so appealing, as was its goal of explaining what happens in nature.

‘I always try and find ways in which I can get inspiration from nature to develop new things,’ Toutov states. He notes that nature uses simple metals like potassium and sodium to do chemistry, and doesn’t rely on precious metals for catalysis. ‘You won’t look at an enzyme and find platinum in there as the active metal, or gold – nature just doesn’t have them available.’

That’s why Toutov was so intrigued when he and a colleague discovered a few years ago that they could make carbon–silicon bonds with a safe and inexpensive catalyst based on potassium.

The common scientific consensus has been that precious metals are required to break carbon–hydrogen bonds, and to achieve catalytic carbon–hydrogen bond activation. ‘So we were shocked that there were no precious metals in these reactions that we were doing, we only had this really simple potassium additive … but it was actually playing a crucial role, a vital role, in promoting this process.’

Early on, the amount of these carbon–silicon bond products that Toutov and then-partner Alexey Fedorov – a postdoctoral scholar at Caltech who is now at the Swiss Federal Institute of Technology (ETH) in Zurich – were able to generate was fairly minor. ‘They were a small byproduct, maybe 3–10%, so it was nothing thrilling,’ he recalls. ‘Nobody is going to start a business on that.’

However, after spending the next few years trying to optimise the reaction, Toutov synthesised over 100g of a potentially bioactive silicon-containing compound, which is an industrially-relevant amount. ‘That has never been made on that large a scale before,’ he notes.

It was Fedorov who had the idea of running control experiments, which used just potassium tert-butoxide and triethylsilane to break carbon–oxygen bonds. That inspired Toutov to dig deeper and eventually led to the unanticipated discovery of potassium-catalysed C–H silylation.

However, the work is controversial. Toutov suggests the findings have been met with some scepticism and disbelief because they challenge deeply entrenched scientific beliefs. ‘The disconnect is that in the past 50 years a paradigm was developed in chemistry saying essentially that you need precious metals to activate carbon–hydrogen bonds.’

‘When something rolls around like this saying potassium can do this – “you mean the stuff that’s in bananas?” – then people start to be shocked,’ Toutov says. Although it is unclear exactly how this reaction is working, what is clear is that it proceeds through a mechanism that is very different from the traditional precious metal catalysed C–H activation.

In terms of the benefits of producing these silicon-containing organic chemicals, Toutov points to emerging research indicating that the efficacy of a known drug can be improved and its negative side-effects decreased if silicon is added to it in certain parts.

BioNumerik Pharmaceuticals in the US has the first drug with added silicon to enter phase III trials in humans. Karenitecin, an investigational anti-tumour drug being studied as a treatment for advanced ovarian cancer patients, potentially has fewer side-effects, improved efficacy, less susceptibility to drug resistance mechanisms and an improved safety profile compared to the currently marketed camptothecin anticancer drugs, according to BioNumerik.

Beyond pharmaceuticals, the field of agrochemicals is now adding silicon to various pesticides to increase their efficacy and biodegradability. But there are also significant applications for pure chemistry, which has long used silicon for various chemical reactions that are hard to do with other elements.

For about a decade, chemists have been trying to substitute hydrogen with silicon, but this process has turned out to be extremely challenging. Typically, they have to resort to brute force, such as throwing a really reactive chemical at this carbon–hydrogen bond to activate it, and then add silicon. However, this approach is problematic because it requires large amounts of highly reactive chemicals that are toxic and dangerous – some of them actually ignite in air.

The more modern alternative is to use precious metal catalysts, but they are expensive, of limited supply, and are subject to market as well as geopolitical forces.

While some of these precious metal catalysts cost $250,000 (£160,000) per mole, Toutov says the potassium catalyst he has developed costs only about $30 per mole, or less. ‘It is safer and non-toxic, and a lot more cost-effective,’ he states.

In addition, this catalyst is greener and more sustainable. It can be made from biomass, which, according to Toutov, is ‘a total game-changer’.