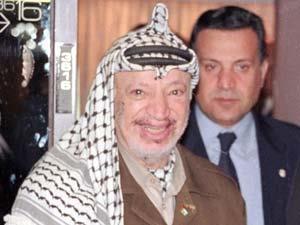 An unusual piece of detective work is beginning today in Ramallah in the Palestinian territories. Swiss, French and Russian scientists have been to the grave of the former Palestinian leader Yasser Arafat as his body is exhumed. They are there to investigate claims that he was poisoned and will be taking tissue samples away for forensic analysis.

Arafat died in November 2004 after being diagnosed in Ramallah with what appeared to be viral gastroenteritis. As his condition worsened he was moved to a French military hospital where he later died. The cause of his death has been the subject of considerable speculation and rumour, as his wife, Suha Arafat, did not consent to doctors conducting an autopsy. Theories on the cause of Arafat’s death have ranged from a blood disorder, to Aids and poisoning. In recently released medical records, French doctors stated that Arafat died from a stroke brought on by disseminated intravascular coagulation, a disorder that results in the formation of tiny blood clots. However, the cause of this syndrome is unknown.

Then, in July, scientists from the Institute of Radiation Physics in Lausanne, Switzerland, released the findings of an investigation into Arafat’s personal effects. Using a-particle spectrometry and ?-ray detectors they investigated whether the clothing, and other items such as his glasses, which Arafat had worn shortly before his death, showed signs of radioactive contamination. The ?-ray detector didn’t pick up anything. But tests using more sensitive a-particle spectrometry uncovered a distinct energy signal at 5.3MeV. This energy ‘fingerprint’ matches the a-particles – a helium nucleus, two protons and two neutrons – that are ejected when polonium-210 decays to the stable lead isotope, lead-206. This polonium-210 fingerprint was found on a number of pieces of clothing at up to 49mBq/g – about 25 times greater than background radiation levels.

Members of the team that will analyse Arafat’s tissue samples did not respond to requests for comment from Chemistry World. They are reported to be the subject of a media blackout imposed by the Palestinian authorities.

Polonium-210 first rose to the attention of the world when it was used to assassinate former Russian spy Alexander Litvinenko in London. The radionuclide is an extremely lethal poison, with less than a microgram capable of killing someone. Once ingested, polonium is distributed throughout the body emitting a-particles as it goes, damaging DNA and creating free radicals that destroy tissues. Only around 100g of polonium-210 are made each year in nuclear reactors by bombarding bismuth-209 with neutrons. There are relatively few applications for polonium-210, but it is used in static charge removing devices and as a power source in space exploration.

Phil Walker, a physicist at Surrey University, UK, says that, despite more than 21 half-lives of polonium-210 passing, it should still be possible to pick it up if there’s any indication of foul play in Arafat’s death. Paddy Regan, also at Surrey, agrees and notes that, while only one atom in 2.5 million of the original polonium-210 would remain after eight years, a-particle spectrometry is extremely sensitive. ‘You can measure the amount of polonium-210 in a cigarette,’ he notes.

To extract any polonium-210 that might be in Arafat’s tissue, the investigators will first need to process them to remove the solid material and purify the samples. Silver discs would then be placed in contact with the extracts, whereupon the polonium-210 spontaneously electroplates itself to the discs. These discs are then ready for analysis using a-particle spectrometry. Regan adds that the tissue extracts would usually be spiked with a known amount of polonium-209. Polonium-209 emits a-particles with a different energy to polonium-210, and can be used by the investigators to assess the efficiency of their separation process. This, in turn, will help the investigators determine how much polonium-210, if any, Arafat ingested.

The question still remains as to why anyone would want to use polonium-210 to kill someone if traces can still be picked up eight years later. ‘Polonium is a good assassination tool because the concentration is internal, unless you spill it as happened with Litvinenko,’ Walker says. ‘But if you can deliver it to someone and get it inside them it eats them away from the inside. What’s remarkable is that so little more penetrating radiation comes out. An 803keV ?-ray would come out of the body, but only in 1 in 100,000 decays … It doesn’t leave a rusting blade behind, so I think it’s a carefully considered radioisotope – I’ve never come across a better one [for assassination].’