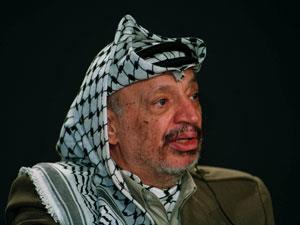 The investigation into whether or not the former Palestinian leader Yasser Arafat was poisoned with a radioactive isotope of polonium almost ran out of time. As it is, eight years after his death the amount of polonium found by Swiss investigators in most samples from his grave are small and ambiguous, thanks to the decay of the radionuclide. Nonetheless, the available evidence has led them to conclude that their results ‘moderately support the proposition that the death was the consequence of poisoning with polonium’.

Arafat took ill suddenly on the evening of 12 October 2004 with severe nausea, vomiting and stomach cramps. He died one month later at a French military hospital, yet his illness remained a mystery. There was no autopsy and no biological samples left for tests.

Scientists investigating Arafat’s death previously found polonium traces when they analysed his personal belongings. The garment with the most polonium-210 – urine-stained underwear – had up to 40 times the background level of the radionuclide.

The only confirmed poisoning using polonium-210 was that of Russian dissident Alexander Litvinenko in London in November 2006. He is believed to have ingested a quantity of the isotope with an activity of 1–3GBq. His death triggered a rethink of the Arafat case. The Swiss team now estimate that if Arafat swallowed a quantity of polonium-210 with an activity of 1GBq in October 2004, this would roughly tally with the 181mBq they found on his underwear.

The unexplained polonium-210 on Arafat’s personal effects led to the opening of his tomb last November. Russian, French and Swiss investigators took samples from his body, shroud and surrounding soil. The report from the University Centre of Legal Medicine in Switzerland was posted last week by Al Jazeera. The French and Russian teams have yet to report publicly.

The Swiss team measured polonium-210 levels using a-spectrometry to detect a distinct energy signature at 5.3MeV. This tell-tale signal indicates the presence of a-particles – two protons and two neutrons – ejected when polonium-210 decays to lead-206, a stable isotope. They also measured how much lead-210 was present using ?-spectroscopy.

Polonium-210 occurs naturally, however, and the scientists had to try to compensate for this. Naturally occurring uranium-238 goes through a decay chain to produce lead-210, which decays to bismuth-210 and this rapidly yields polonium-210. Lead and polonium isotopes reach a predictable state of equilibrium in nature. However, synthetic polonium-210 made by irradiating bismuth-209 with neutrons has lower levels of lead-210, which marks it out as man-made or unsupported.

Many of the bone samples also had suspicious levels of polonium-210, with tests on a rib discovering it had 18 times the background level of the isotope. Tissue surrounding bones was twice as radioactive as the reference soil and shroud specimens. The report also noted that lead-210 in the bones and soft tissues were up to 20 times greater than expected. ‘Unsupported polonium in the personal belongings is compatible with artificial polonium,’ notes report author François Bochud. ‘In the grave samples, polonium appeared to be supported [or from natural sources]. But the quantity of lead-210 was significantly higher than the reference values.’

The Swiss team theorise that traces of polonium-210 were masked by impurities of lead-210 in a putative poison dose. This is backed up by their discovery of lead-210 contamination in a commercial sample of polonium-210. ‘Polonium is a “soft-tissue seeker” and lead is about 10 times more likely to end up in bones than polonium,’ Bochud says. ‘Furthermore, we measured the personal belongings almost one year before the bones and polonium decays much faster than lead-210. Unsupported polonium was therefore more likely to be measurable in the personal belongings. On the other hand, lead-210 in bones was more likely to be present in higher quantities and therefore hide the potential presence of unsupported polonium.’

Paddy Regan, a nuclear physicist at the University of Surrey, UK, praises the report as thorough. He adds that they’ve measured the isotopes accurately, reported their results honestly and got a few samples with unexplained polonium-210. As a result he says that foul play can’t be ruled out in Arafat’s death.

Regan is, however, circumspect about the high levels of polonium widely reported in Arafat’s rib. ‘Samples were very small, less than a gram, and you can get variations on an order of magnitude in the natural environment,’ he notes. ‘It’s not that they measured 100 samples and found 18 times higher activity than the background in each of them.’ He also notes that in some bones they discovered more lead-210 than polonium-210, which he suggests might be a sample extraction artefact.

He adds that these findings should be approached with caution. ‘More than 20 half-lives have passed since Mr Arafat’s death and the analysis of his remains,’ Regan says. ‘If you do the sums you get much less than one part per million of any original polonium, so unless you had a huge initial dose, it would be down to a level that would be pretty close to what you expect to see as normal background.’ He says if measurements had been done three years ago, the expected radiation levels if he had been poisoned would be hundreds of times what they are now and the Swiss team would have been in a position to make a much stronger statement. No further radiological evidence is likely to emerge and investigators will need to follow other leads now if they are to solve the mystery.