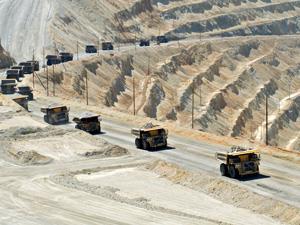 Over a million litres of a cyanide solution leaked from the Veladero gold mine in Argentina’s western San Juan province into nearby rivers in the Jáchal basin, following a pipe valve failure on 12 September. The event has exposed underlying tensions, with local residents questioning official information released about the potential health consequences of the accident.

Emergency back-up measures at the mine, which is owned by Canada’s multinational corporation Barrick Gold, also failed because a floodgate in a containment basin that could have prevented the cyanide from reaching the river had been left open. In open-pit mines such as Veladero, cyanide is commonly used to extract gold from processed rocks.

Following the incident, a local court temporarily suspended some operations by the Veladero mine. Barrick says it immediately implemented a comprehensive downstream water monitoring programme. An investigation into the root causes of this incident remains underway, but Barrick Gold announced on 25 September that restrictions on processing activities had been lifted.

For its part, Barrick Gold says that there is no evidence of contamination in surrounding rivers. The company states that its monitoring, as well as testing results from an independent third-party laboratory, has confirmed that the cyanide leak poses no risks to the health of downstream communities.

These findings are consistent with independent water test results released by other third parties in San Juan province, including the public health department and the state water distribution company, according to Barrick Gold.

Meanwhile, the director of the San Juan province’s water and energy resources, Jorge Millón, also confirms that the results of the three studies carried out by the provincial authority for mining and the state-owned water and sanitation provider OSSE-San Juan indicate no cyanide contamination. These surveys analysed river waters downstream from the spill and then compared the findings with existing baseline information.

However, nearby residents are saying that they don’t trust the official information and figures that have been released about the accident, not even those put out by the University of San Juan. They note that the university receives subsidies from the mining company.

Locals are disturbed by what they call ‘inconsistent messages.’ Not only was the company late in providing information about the incident, but it also increased the estimated size of the spill five-fold eventually, they say. Originally, Barrick Gold had reported that 224,000 litres of the cyanide solution had been released, but that figure was revised upward to 1.08 million litres.

Although Barrick Gold and the San Juan Mining Chamber agreed that the spill posed no threat to the population, suspicion was aroused because the provincial government quickly distributed bottled water and advised local residents not to drink tap water until further notice.

After the accident, several court inquiries were initiated to investigate the culpability of Barrick Gold, as well as the provincial and national governmental authorities in Argentina that are charged with overseeing the mine’s operation. These are ongoing.

In order to maximise security protocols and prevent similar mishaps in the future, the Argentina Chamber of Mining Companies has requested that Barrick Gold, which is one of its members, provide a thorough report detailing any human error and technical causes of the accident.

The OSSE-San Juan has agreed to oversee water samplings efforts through which three private laboratories will test cyanide levels at different points along the river basin twice-weekly for a month.

Cristian Andino, the president of OSSE-San Juan, points out that the source of drinking water in question is the Huerta Huachi underground well, which is located further north and has no connection with the Jáchal River.

The accident led to cyanide contaminated water spilling into the Turbio River, which runs into the Blanco River, and then meets the Jáchal River. Because the Turbio’s water has a very low pH and contains no flora or fauna, this creates conditions where cyanide would degrade quickly, according to Jorge Orellano, who directs the University of San Juan’s Institute of Hydraulic Research.

‘When they wanted to measure cyanide in the river Blanco they noticed that its value was lower than above, in the mine,’ he says.

Legal representatives have acted very quickly in response to this incident, and social mobilisation has also been very important. In fact, Orellano says more than 3000 local residents congregated in San Juan’s main square to express their concern about the incident, and this public pressure has forced the authorities and the provincial government to make demands of Barrick Gold.

The mishap in Argentina follows an incident in the US in August in which errors made by US Environmental Protection Agency workers investigating an abandoned gold mine in Colorado ended up releasing more than 11 million litres of water contaminated with metals such as lead, mercury and cadmium into US waterways.