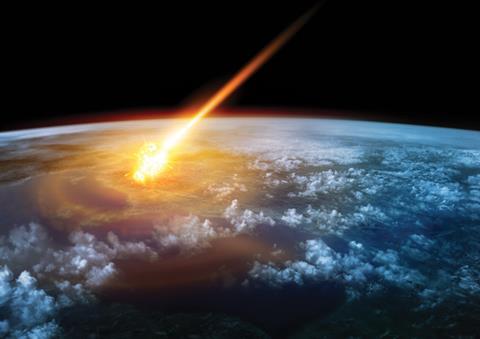 Scientists in the Czech Republic and US have shown how asteroid collisions with early Earth could have sparked reactions that produced the basic chemical building blocks of life four billion years ago.1 The team used lasers to simulate the plasma produced by asteroid impacts on prebiotic Earth and found that this led to a cascade of reactions that formed RNA and DNA nucleobases from formamide.

Formamide was first suggested as a parent compound of the precursor chemicals needed for life in 2001 by Raffaele Saladino, Ernesto Di Mauro and colleagues.2 They proposed a prebiotic scenario in which formamide could have been concentrated in lagoons and exposed to UV radiation at elevated temperatures in the presence of various catalysts.

More recent experiments by this and other groups have revealed how, under specific conditions and catalysts, formamide can be turned into nucleobases, as well as nucleotides – the building blocks of DNA and RNA made up of a nucleobase, a sugar and a phosphate group.

Now, Svatopluk Civiš and colleagues at the Academy of Sciences of the Czech Republic and Southwest Research Institute in Boulder, US, have corroborated the formamide hypothesis in the context of the Late Heavy Bombardment (LHB) 4 billion years ago. The LHB is a hypothetical period during which the Earth may have been showered with asteroids just about the time that life is thought to have begun.

The researchers reasoned that if lagoons containing concentrated formamide existed on the early Earth then these must also have been exposed to a hot, dense plasma following an asteroid strike. They suggest that this could have initiated a series of chemical reactions that led to the formation of nucleobases without a catalyst. ‘By combining experiment and theory we were able to provide a complete mechanistic model for a new radical-based reaction route from formamide to nucleobases, which is highly relevant to the Late Heavy Bombardment period when the extra-terrestrial impact activity was an order of magnitude higher than today,’ says Civiš.

The team simulated an impact plasma with a high-power laser. When a solution containing formamide was exposed to plasma, the team observed that the initial dissociation of the formamide molecules produced a large amount of highly reactive cyanide and ammonia radicals. These, in turn, were shown to react further with formamide to produce the nucleobases adenine, guanine, cytosine and uracil.

‘This work represents a very interesting possibility for one avenue for the origin of prebiotic precursors on the primitive Earth,’ says Nir Goldman, who studies the synthesis of prebiotic compounds at the Lawrence Livermore National Laboratory in California, US. However, he suggests that the solutions in the study were limited in chemical content and thus not representative of conditions on early Earth where chemical conditions were likely much more diverse.

Jeffrey Bada, who investigates the chemical origins of life at the Scripps Institution of Oceanography in California, US, has further reservations. ‘Although the simulations carried out in this paper are interesting from a straight chemical synthesis point of view, the relevance of this to the prebiotic chemistry of the early Earth is questionable,’ he says. ‘As with other recent papers dealing with the formation of nucleobases and other compounds from pure formamide, there is a critical question about these various scenarios: is the presence of pure formamide plausible on the prebiotic Earth? The answer is probably no.’

Civiš’ team, however, suggest that pure formamide wasn’t necessary. ‘Saladino and Di Mauro’s formamide pond hypothesis assumes concentrated formamide and not water-free, chemically clean formamide,’ says co-author Judit Šponer. ‘This formamide serves as a reaction medium as well as the starting material of the synthesis, but the dissociation products of formamide are also utilised in the course of the multi-step synthesis.’

But Bada remains unconvinced that even a concentrated formamide pond could exist as it would be highly unstable and would not last long on primitive Earth. ‘Even assuming in the exceedingly improbable case that all of Hadean Earth’s nitrogen was converted to cyanide and dissolved in the oceans, only a 0.2M cyanide solution could be produced,’ he explains. ‘If all this was somehow converted to formamide before it hydrolysed to formic acid and ammonia you would end up with only a 0.1M solution. Concentrating this with a lot of water around seems like a tall order.’

Correction: On 10 December the story was updated to remove mention of the nucleobase thymine, which was not synthesised by this protocol