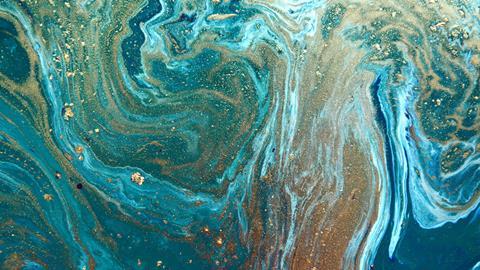 All known life forms generate and exploit pH gradients. There are still uncertainties over the systems that present-day organisms use but how primitive life did is even more of a mystery. In new research, however, scientists in Italy attempt to square this circle by demonstrating a simple metal ion system that could have catalysed prebiotic reactions.

Modern organisms use highly-evolved enzymes to shuttle protons and drive reactions that would otherwise be thermodynamically unfavourable. However, the functions of these proteins are often ultimately controlled by metal ions at the centre: the rest of the protein simply increases selectivity or reactivity. As these ions could have been present on the early Earth, scientists suggested decades ago that they could have catalysed prebiotic chemistry.

Researchers have proposed different potential mechanisms, but these have largely remained untested, explains biochemist Sheref Mansy of the University of Trento. Moreover, he says, ‘the mechanisms people proposed for prebiotic pH gradient generation were always entirely different from what you’d find in a modern biological cell.’

Now, in a series of electrochemical experiments, Mansy and colleagues have shown that, under conditions similar to those thought to have existed on Earth around the time life first emerged, Fe(III) ions co-ordinated to peptides can oxidise NADH (nicotinamide adenine dinucleotide – a nucleotide important in modern metabolism that researchers have proposed could have existed on the early Earth). The resulting Fe(II) complexes can then be reoxidised by hydrogen peroxide – also thought to have been present on Earth at the time – back to the Fe(III) complexes. This continual shuttling of electrons from NADH to hydrogen peroxide can generate a pH gradient. ‘You can see a pathway from the chemistry we’re describing to that you’d find in a modern day cell,’ says Mansy. 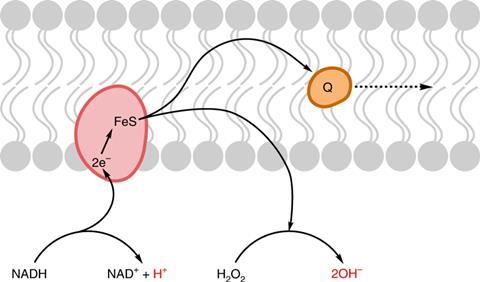 NADH donates two electrons to two Fe(III)-peptides. The reduced metallopeptides can either transfer these electrons to a terminal electron acceptor, thereby making OH– or to an intermediate electron carrier

Questions remain, however. For example, researchers believe protocell walls were proton-permeable, so pH gradients would not have lasted long. Secondly, whereas modern cells make productive use of pH gradients to synthesise ATP and thereby store energy for various reactions, it is unclear how the ability to move protons would confer a selective advantage on a protocell. ‘The gradient needs to do something useful. We’ll have to do to figure out what that is,’ says Mansy.

Biogeochemist Jeffrey Bada of the University of California at San Diego, US, is sceptical about several aspects of the mechanism, such as its reliance on NADH in a prebiotic environment. ‘NADH is a complex molecule with phosphate ester bonds linking the nucleotides. The phosphoester bonds are highly unstable and thus NADH would be hydrolysed quickly.’

Organic chemist John Sutherland from the University of Cambridge, UK, however, argues that the approach to prebiotic chemistry from the inorganic side is very significant and says the stability argument is a red herring. ‘Biology makes and degrades all the time. If all the cellular components were built like German washing machines you’d never get anywhere.’