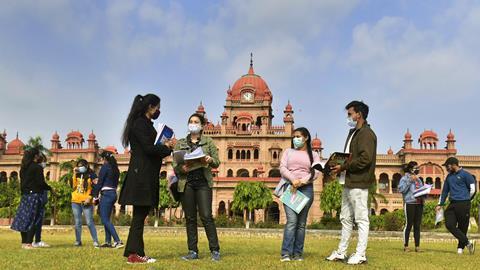 In an ambitious initiative, India is aiming to rejuvenate and transform its research ecosystem. The centrepiece of this will be a new funding body – the National Research Foundation (NRF) – taking inspiration from the US National Science Foundation and UK Research and Innovation. For this, the government has announced a mammoth budget of INR500 billion (£4.9 billion) spread over next five years.

Historically, the vast majority of universities and colleges in India’s provincial states have been starved of funds, while central government funded universities have fared better and national laboratories have received generous funding.

‘The research conditions, manpower recruitment and laboratory facilities in our state universities and colleges – especially in rural areas – have simply been pathetic,’ complains a chemistry professor from Devi Ahilya University in Indore, Madhya Pradesh state in central India, who wishes to remain anonymous. Symptomatic of the hopeless situation in many states, until very recently new faculty had not been recruited for over a quarter of a century in many higher education institutions in Madhya Pradesh. Infrastructure is just beginning to improve in the state, courtesy of a two-year-old World Bank project.

Overall, less than 1% of the country’s approximately 40,000 higher education institutions engage in research and there is no culture of research at most of them. India’s investment in R&D as a percentage of GDP, compared with other countries, is extremely low: 0.69% in 2018 compared with 2.8% in the US, 2.1% in China and 4.5% in Israel. In India, the number of researchers per million people is only 255, compared with 1225 in China, 4245 in the US and 8342 in Israel.

The NRF aims to change this. ‘This kind of an initiative is happening for the first time in independent India,’ says Shailja Vaidya Gupta, senior science adviser to the Indian government. In the first year, INR15 billion of new funding will be provided by the government and the NRF hopes to mobilise the remaining INR85 billion in that year. ‘We hope to be aggregators and integrators of various large science programmes requiring inter-disciplinarity,’ says Gupta. There will be no cut in the existing funding of any institution, she adds.

Futuristic mega science projects – the second major NRF area – will pose a different kind of challenge and Indian experts are studying the US Defense Advanced Research Projects Agency and other international models, says Gupta. The NRF will again be entering uncharted territory and will have to articulate new protocols for universities and colleges where conditions are poor, while education budgets will also need to grow for faculty recruitment and facilities.

‘If you don’t have scientific infrastructure in state universities and colleges, you can’t propose competitive projects,’ says Partha Majumdar, president of the Indian Academy of Sciences, Bengaluru. It’s not that those researchers don’t have ideas but that they are at a disadvantage as they do not have the facilities or grants to carry out competitive research and cannot show preliminary data compared with scientists in national labs, he says.

‘Providing funding to state universities and colleges is a great idea – as long as it’s done in a transparent and competitive manner,’ says Majumdar. ‘We need more clarity on how the NRF will be administered and we know the devil is always in the detail,’ he says.