Bees may be doomed to consume nectar contaminated with neonicotinoid pesticides, according to new behavioural studies carried out by UK researchers. In contrast to previous research, behavioural studies suggested the insects do not avoid feeding on neonicotinoid-treated plants, and may even be choosing to do so, ingesting far higher amounts of the pesticides than most toxicity studies account for.

Systemic pesticides of the neonicotinoid family were once hailed as a green alternative, as the coating of seeds is more targeted than the blanket spraying of earlier products, and tests seemed to suggest that their acute toxicity to useful insects like bees is low. But since the emergence of ‘colony collapse disorder’ in 2006-07, researchers have revisited neonicotinoids, and uncovered evidence that they may be linked to declining bee populations. Several studies have shown that sub-lethal effects on insect brains can interfere with the insects’ ability to navigate and communicate, which are vital for the survival of colonies in the long term. 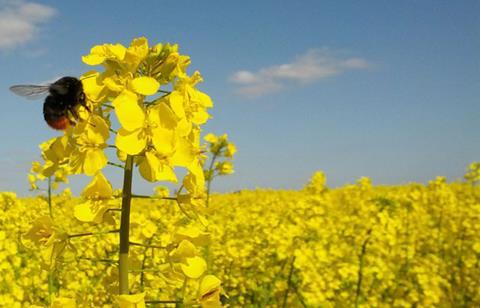 Bees may prefer to feed on nectar contaminated with neonicotinoids, so their exposure could be higher than previously assumed

Two years ago, these concerns led to an EU ban on the use of certain neonicotinoids on flowering crops. The ban runs until December this year, and the European Commission will have to decide soon whether to renew it. A key argument of those who originally opposed the ban, including the UK government, was that bees in their natural environment would choose not to feed on the nectar from neonicotinoid-treated plants. This view was backed up by a UK study in 2013, but new research combining behavioural observations and neuroscience has cast doubt on this conclusion.

Geraldine Wright’s group at Newcastle University, UK, used neuron recording techniques to show that neither honeybees nor bumblebees are able to identify neonicotinoids by their bitter taste sensation, which enables them to avoid other substances including nicotine. The researchers were surprised to find that, even though the food tastes the same with or without the pesticide, the insects tended to eat more of the contaminated food.1

‘It is highly surprising and alarming that bees seem to preferentially feed more on food that is contaminated with neonics,’ comments Dave Goulson from the University of Sussex, UK. ‘If that happens in the field, then actual exposure of wild bees may be considerably higher than has been recognized, and the effects on the bees much worse.’

A field study published at the same time as Wright’s group’s research shows significant deleterious effects of a neonicotinoid-treated crop on bumblebees and solitary bees, but not on honeybees.2 Thus, EU officials will have plenty of reading material to consider before the current ban expires.

To justify voting against the EU ban in 2013, the UK government relied on a field study by Britain's Food and Environment Research Agency (FERA) published the same year, which concluded that there was no clear evidence of a harmful effect of neonicotinoids on bumblebee colonies located near a field planted with neonicotinoid-treated crops, compared to a control location without these pesticides.

Dave Goulson has now re-analysed the data presented in the FERA study and discovered that the data don’t support the published conclusions. Applying his simpler analysis to the original data FERA reported, Goulson found that there was indeed a statistically significant correlation suggesting that the welfare of the bumblebee colonies is harmed by the presence of neonicotinoids in the field nearby. 'The problem is that their conclusions do not match the results of their own analyses – and because their analysis was very complicated, this discrepancy wasn’t immediately obvious,’ Goulson explains.