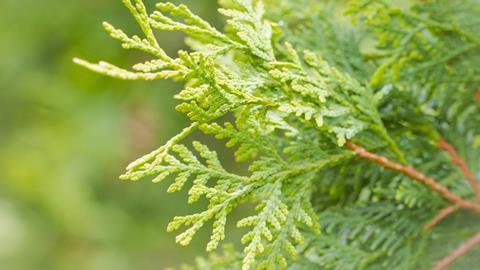 US scientists have derived several high performance fuel compounds from cedarwood oil. One has an energy density comparable to missile fuel, while another could replace diesel in an ordinary diesel engine. Challenging the perception that biofuels have inferior properties to their petroleum-based counterparts, these sustainable fuels could enhance the efficiency of land and air vehicles alike. 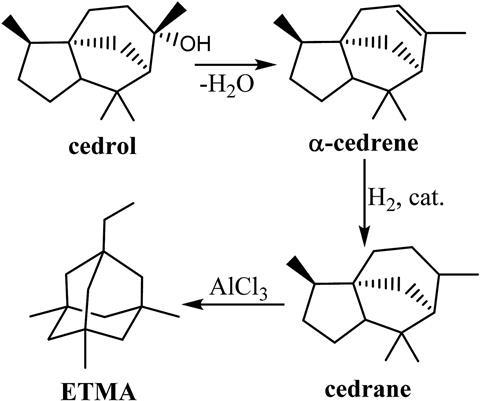 Conversion of cedrol to ETMA

First generation biofuels originate from starches, sugars, fats and oils with various biological sources, but they are not always suitable for use as a drop-in fuel and are usually modified to make them compatible with modern engines.

The team then isolated a compound called cedrol from cedarwood oil. They dehydrated, hydrogenated and isomerised it to obtain 1-ethyl-3,5,7-trimethyladamantane (ETMA), an alkyl diamondoid, so called because these small cage-like molecules resemble the repeating chemical structure of diamond. ‘Multicyclic hydrocarbons typically have very low cetane numbers, meaning that they do not combust as easily as straight chain hydrocarbons,’ explains Harvey. ‘The high cetane number of these fuels allows for their use in conventional diesel engines, while their higher energy densities can increase vehicle range.’ Indeed, ETMA has a suitable cetane number and viscosity for use in an ordinary diesel engine, with a 5% higher energy density than standard diesel.

‘The proposed approach is a nice breeze of fresh air to the biofuels field,’ says Rafael Luque, an expert in biomass valorisation and biofuels at the University of Córdoba in Spain. He thinks that the work is innovative, but adds, ‘there are issues to resolve including the costs and, most importantly, availability of the feedstocks.’

Harvey agrees that there is a way to go to make such fuels a commercial reality, but points out that other researchers are already starting to look at this problem. ‘Several companies around the world are already making sesquiterpenes by fermenting biomass derived sugars, and other researchers are investigating metabolically engineered trees that overproduce the compounds for non-destructive tapping.’