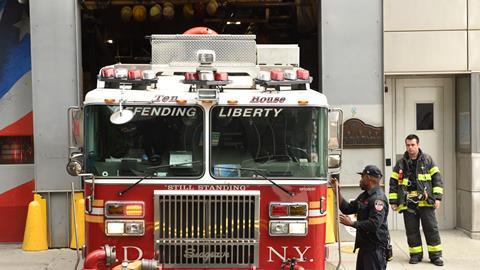 Two dozen metabolites in blood samples from firefighters who were exposed to the dust and smoke from the World Trade Center (WTC) towers, during the 11 September 2001 terrorist attacks in New York City, can accurately predict which will develop lung disease.

The research, carried out by a team at New York University, showed that certain metabolic changes in the blood of these firefighters were ‘highly predictive’ of obstructive airway disease and lung injury. These included decreases in sphingolipids, declines in branched-chain amino acids and increases in the levels of stress hormones, which may induce inflammation.

The findings, described as a ‘chemical profile’ of which firefighters are most at risk of developing lung disease, are based on an analysis of blood samples taken from the firefighters within 200 days of the attacks, before any of them become ill. The researchers took these firefighters, who all had no history of smoking and normal lung function prior to the attacks, and segregated them by lung function. They then used machine learning to identify metabolites associated with clinical lung injury, and initially identified 580 metabolites that could be involved in decreased lung capacity. Eventually, five clusters of metabolites predictive for lung injury emerged.

The study’s senior investigator, Anna Nolan, explains that this metabolomic approach measured all small organic molecules detectable in biological fluids. Nolan and the rest of her team hope that their findings can yield metabolic tests that will help detect early lung damage in people exposed to fine particles from natural disasters and other sources, like smoke or toxic chemicals.

The NYU researchers also argue that diet could help to prevent or reverse the health effects of exposure to particulate pollutants. Correcting metabolic imbalances through dietary changes or food supplements might be able to reduce systemic inflammation and improve lung function, Nolan explains.

Brian Christman, the vice-chair of the Department of Medicine at Vanderbilt University in the US whose research focuses on acute lung injury and pulmonary disease, calls the NYU team’s work ‘a major hypothesis generating paper’, and says it can help guide efforts to treat victims of future environmental accidents or industrial exposures. ‘Using this machine learning technique to begin to tease out of all of these complicated metabolic pathways, they were able to pull out some [metabolites] that seemed to have an important interaction.’

However, he has some reservations. ‘What would have been useful would have been to draw blood on everybody on day zero and then later on look at the people who developed lung injury, and then pulled their blood out of the freezer to see if any metabolites could have predicted that injury,’ Christman says. ‘Instead, they found some people later with lung disease and went back and got some blood that happened to have been drawn, and tried to do a careful case cohort study using some very good data analysis – but it is not exactly the same as a prospective trial.’

Nevertheless, the NYU findings make sense to Thomas Cahill, a professor emeritus of atmospheric science at University of Californi, -Davis, US who conducted key air quality research following the WTC attacks. Although Cahill’s analyses only examined elements and simple chemicals in the air around the WTC site, he recounts finding very fine and ultra-fine aerosols of 0.25μm in diameter or smaller that could penetrate deeply into the lung. ‘These would be a likely way the chemical changes could be initiated,’ he tells Chemistry World.