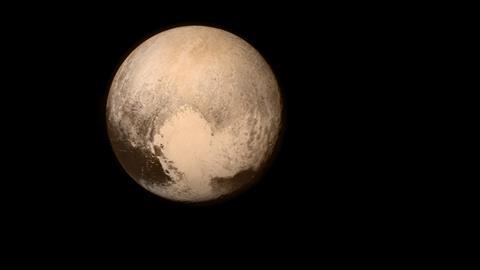 Caged gas blanket may explain why Pluto’s oceans are liquid

A thin blanket of trapped gas could explain why Pluto still has a liquid ocean, despite the lack of tidal or radioactive heating. The gas-containing clathrate hydrate layer also indicates that the dwarf planet’s oceans could be significantly warmer and less ammonia-rich than previously believed, which might mean that life could exist on Pluto.

Sitting at the edge of our solar system roughly 5.9 billion km from the sun, Pluto boasts a maximum surface temperature of roughly -223°C. Yet despite its frozen surface, it has long been believed that beneath its icy shell, the dwarf planet has a liquid subsurface ocean. One of the primary reasons for this assumption is Sputnik Planitia, a 1000km wide basin located near the equator that has a much lower topography than the surrounding region, a feature that indicates a locally thinned ice shell over a subsurface ocean. 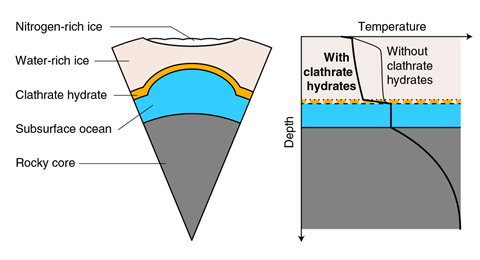 Other bodies in our solar system are thought to have liquid oceans thanks to tidal heating, such as Jupiter’s moon Europa and Saturn’s Enceladus. Pluto, however, isn’t subject to the same gravitational forces as those moons, and so does not benefit from the same effect. Similarly, it is believed that radiogenic heating would be insufficient to prevent freezing unless the ice shell was highly viscous, something that would eliminate the possibility of the local ice thinning observed in Sputnik Planitia.

Another possibility is that Pluto’s ocean has a high concentration of ammonia, lowering its freezing point. However, this would require a huge amount of a substance that is relatively scarce in Kuiper belt objects like Pluto, making it unlikely. This theory also conflicts with the belief that the ice shell has a lower density than the ocean – allowing it to float on the surface – and thus has to be primarily made up of water.

Instead, the Japanese team has suggested a new clathrate hydrate theory that could resolve these issues. The proposal suggests that a thin layer of gas molecules, likely methane, held in cages of ice could have formed at the base of the ice shell and is acting as a highly viscous insulator between the ocean and the ice shell. This theory is supported by thermodynamic projections, as the higher melting point of clathrate hydrates, in comparison to pure water, and the predicted pressure of Pluto’s ocean, if sufficient gas is present, means the formation of the hydrate layer should be favoured over ice.

‘The mechanism suggested in the paper is a promising explanation for the seemingly conflicting existence of a cold ice shell with lateral thickness variations over a necessarily warm liquid ocean on Pluto,’ says Prabal Saxena from the Goddard Space Flight Center, who has previously published on tidal heating of large trans-Neptunian objects. ‘What’s fascinating is that such a mechanism may be a fairly common means of extending the longevity of oceans on other large icy worlds in our solar system and suggests that liquid water may be fairly resilient in places that are not conventionally thought of as ocean worlds.’

If accurate, this theory indicates an entirely different environment within Pluto’s ocean than was expected. This would make the dwarf planet significantly more hospitable to life.

‘The previous hypothesis is an extremely ammonia-rich and extremely cold ocean – nearly 30wt% of ammonia and about -70°C,’ says lead author Shunichi Kamata from Hokkaido University in Japan. ‘Our hypothesis does not require such an extreme ocean: a water dominated, and thus near 0°C ocean. I’m not a biologist so I’m not sure, but I suspect that the latter would be preferred for terrestrial-type life. What we find is a new, generic mechanism to achieve a long-lived ocean, which would be crucial for life to form.’