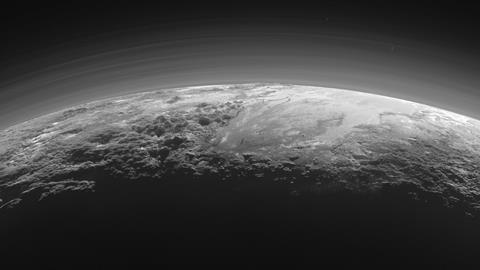 Hazy hydrocarbons explain why Pluto is even colder than expected

A haze of hydrocarbon particles in its atmosphere might be the reason Pluto is cooler than had been predicted. This makes the dwarf planet the only solar system planetary bodies whose temperature isn’t principally controlled by gases.

When Nasa’s New Horizon’s space probe sent the first direct measurements of Pluto back to Earth, scientists were surprised by how cold the dwarf planet’s atmosphere is: only around –203°C at altitudes above 50km. Although Pluto orbits the sun at a distance of almost 6 billion kilometres – so one would expect it to be cold – Earth-bound observations had placed its atmospheric temperature at a much warmer –173°C.

Pluto’s atmosphere was thought to be made solely out of different gas layers, but this could not explain why it is so much colder than predicted. Xi Zhang from the University of California, Santa Cruz and colleagues believe they have found the culprit: a haze of tiny particles.

Zhang’s team created a mathematical model of how nanoparticles would influence Pluto’s atmospheric temperature, and found it to match almost perfectly with New Horizon’s observations. The particles are thought to be around 150nm in diameter, and likely to consist of hydrogen cyanide, acetylene and other organic compounds, similar to the ones found around Saturn’s moon Titan. They absorb infrared radiation and decrease the atmosphere’s temperature by radiative cooling.

Unlike the gases in Pluto’s atmosphere, the haze has no short wavelength emission and absorption lines. Earth-bound detectors have not been sensitive enough to spot near-infrared radiation, which might be the reason why the haze wasn’t discovered sooner.