An international team, including researchers from École normale supérieure (ENS) in Lyon, France and the University of Exeter in the UK, has figured out why an impact crater on the surface of Pluto called Sputnik Planitia is filled with nitrogen ice that is surprising polygonal in shape. The scientists were able to show that this astonishing pattern of flat polygons separated by narrow troughs is formed by ice sublimation, a process by which the ice turns directly into gas without going through a liquid state. The team concluded that this sublimation is what seems to power convection in the ice layer of Sputnik Planitia by cooling down its surface. 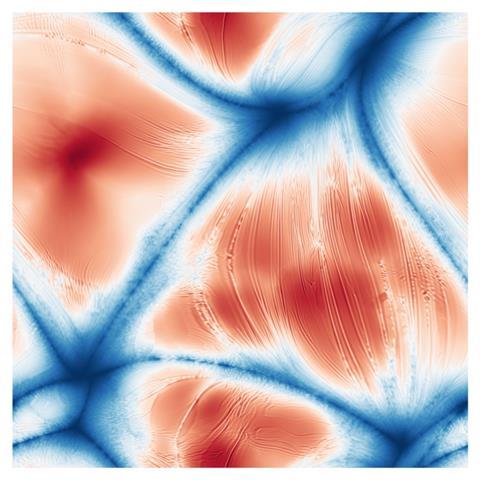 Sputnik Planitia, a basin on the surface of Pluto, displays an astonishing pattern of flat polygons separated by narrow troughs

Interestingly, the new ENS and Exeter study found that the local cooling that results from this sublimation causes movements in the ice layer on the scale of 100,000 years, which is comparable to how fast tectonic plates move on Earth. The process is more similar to the movement of Earth’s oceans than to the behaviour of ice layers on the moons of Jupiter and Saturn. This led the team to wonder whether this same phenomenon might also occur on the surface of other planetary bodies like Neptune’s moon Triton, or the dwarf planets Eris and Makemake in the Kuiper belt.

Back in 2015, when Nasa’s New Horizons spacecraft carried out the only fly-by ever of Pluto, the probe collected data that showed that the planet remains geologically active despite its distance from the Sun and its limited internal energy sources.

‘We know that the surface of the ice exhibits remarkable polygonal features – formed by thermal convection in the nitrogen ice, constantly organising and renewing the surface of the ice,’ explains team member Adrien Morison from the University of Exeter. He notes that it has remained a mystery how this process could occur despite the low level of solar radiation, but now the researchers have filled in the blanks by using complex modelling techniques that showed the cooling from sublimation powered convection in a way that is consistent with various data that has emerged from the New Horizons mission. It is also compatible with climate models that predict sublimation of Sputnik Planitia, beginning around 1–2 million years ago, the researchers say.