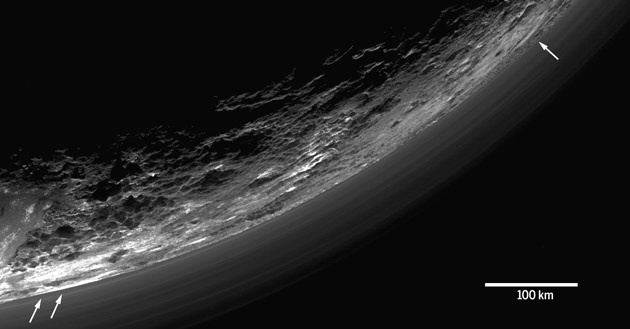 New data from Nasa’s New Horizons mission has offered fresh insights into the composition of Pluto’s surface and atmosphere, along with those of some of its moons.

In July last year the New Horizons spacecraft made a historic flyby of the dwarf planet, and it is still downloading information collected by its on-board instruments, which include cameras and spectrometers capable of detecting electromagnetic radiation at a huge range of wavelengths – from infrared to radio waves.

One study used an infrared camera to examine the surface of Pluto, and found it was dominated by volatile ices, including solid nitrogen and water ice, which have been distributed by different geological processes. The instruments also observed areas rich in tholins – complex abiotic organic material – which appear as red patches on the surface.1 A study surveying the atmosphere showed it was mainly made up of molecular nitrogen, with smaller amounts of methane, acetylene, ethylene and ethane contributing to a ‘haze’ that surrounds the dwarf planet.2

Other studies looked at the geological processes shaping the landscape of Pluto, as well as the way it interacts with solar winds. Researchers say that together, the images and observations from the New Horizons mission will give us a better understanding of how planets evolve.