New carbon allotrope could have interesting physical and electrical properties 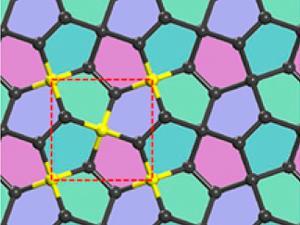 Scientists in China have proposed the existence of a novel 2D allotrope of carbon made up of pentagons, which they have dubbed ‘penta-graphene’. Like graphene, penta-graphene consists of an atom-thick sheet of carbon atoms, but the atoms are arranged in a repeated pentagon pattern, potentially giving it some intriguing and useful physical properties.

In conventional graphene, the carbon atoms make a repeated hexagon pattern like chicken wire. Spherical C60 buckyballs are made up of both hexagons and pentagons, but scientists have so far only been able to synthesise a single carbon nanomaterial made exclusively of pentagons, in the form of a C20 cage. Nevertheless, this does raise the possibility of making other pentagon-based allotropes.

The idea of penta-graphene first came to Peking University’s Qian Wang when she saw artwork on the wall of a Beijing restaurant depicting pentagon-shaped street tiles. ‘When I saw the wall decoration with a pentagonal tiling pattern, I conceived the idea of building a 2D carbon sheet using only pentagons,’ she tells Chemistry World.

Together with researchers from the University of Science and Technology of China in Hefei, Tohoku University in Japan and Virginia Commonwealth University in the US, Wang used computer simulations to explore whether such a material was feasible.

The team found that not only should a pentagon-containing version of graphene be fairly stable, it should also be stronger than conventional graphene and be able to withstand higher temperatures, up to 730°C. It would also be a natural semiconductor, unlike conventional graphene, which is a highly efficient conductor and has to be chemically modified to turn it into a semiconductor. This could potentially prove useful for manufacturing carbon nanotubes (CNTs), as current CNT synthesis processes produce a mixture of metallic and semiconducting CNTs, depending on the orientation of the hexagons when a graphene sheet is rolled up. In contrast, rolling up a sheet of penta-graphene should only produce semiconducting CNTs.

These properties suggest a whole host of potential applications for penta-graphene, from computer circuits to body-armour. ‘[It] may have important applications in nano-electronics, biomaterials, tension-activatable substrates and nano-auxetic materials, and may even find applications in space technologies,’ Wang suggests.

Realising these applications will obviously require penta-graphene to be synthesised, which Wang thinks can be done by peeling single sheets from a layered material known as T12-carbon, although this arrangement of carbon is also purely theoretical at the moment. ‘We are looking for some experimental groups in China that are good at synthesising new materials,’ says Wang. ‘Penta-graphene is energetically more stable than C20 [and so] we hope that it will not be so difficult to synthesise.’

Philip Feng from Case Western Reserve University in Cleveland, US, who works with many 2D nanomaterials, is hopeful that penta-graphene can be synthesised. ‘The structure is fascinating and pretty intriguing,’ he says. ‘If this penta-graphene could be isolated or synthesised, it could be another great addition to the family of 2D crystals.’