Cancer biomarker counted up with the naked eye 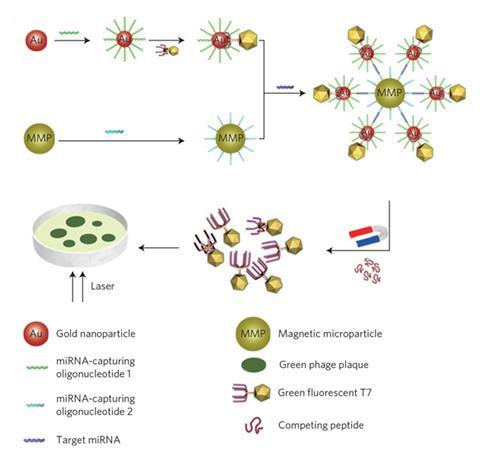 Cancer biomarkers can now be detected and counted by the naked eye. The new technique uses genetically-modified fluorescent viruses to label biomarkers of disease, allowing them to be spotted by eye with an accuracy that is comparable to quantitative polymerase chain reaction (qPCR) – the current gold standard. On top of this, the researchers claim this technique is cheaper and easier to perform and carries no risk of false positives.

Micro RNAs (miRNA) are short lengths of RNA and some cancer cells release them into the blood, where they are thought to contribute to metastasis. Specific miRNAs can serve as fingerprints of particular cancers. Attomolar (10-18M) concentrations can be detected and quantified clinically by qPCR, in which RNA is enzymatically amplified over a series of repeated cycles of heating and cooling, and the product is detected in real time as the RNA is amplified. This method, however, has several drawbacks, notably that selective amplification of one sequence relative to another can lead to false positives.

Scientists at Southeast University in Nanjing, China, and colleagues in China and the US devised a new technique for detecting miRNAs that uses a genetically engineered T7 phage – a type of virus that attacks only bacteria – with a fluorescent green protein at one end and a gold-binding protein at the other. They then added these phages to a solution of gold nanoparticles (GNPs) tagged with an oligonucleotide that binds to one end of an miRNA called let-7a – a biomarker of non-small cell lung cancer. Separately, the researchers functionalised magnetic microparticles (MMPs) with hundreds of copies of an oligonucleotide sequence that would bind the opposite end of this miRNA. They then incubated the phage-labelled GNPs and the MMPs together in a solution containing the cancer miRNAs.

If the cancer biomarker was present, the phage tagged GNPs and the MMPs bound to opposite ends of the miRNA, causing let-7a to act as a glue, sticking hundreds of GNPs to each MMP. If the specific miRNA wasn’t present the two particles didn’t associate. The researchers then magnetically separated the MMPs from the solution, together with any bound GNPs. Finally, the phages were freed from the GNPs and cultured on a host bacterial medium.

Each fluorescent phage virus multiplied on the bacterial medium, forming an individual plaque. Three hours later, the plaques could be counted with the naked eye simply by illuminating them with ultraviolet light and counting the green spots. Each phage present in the sample was associated with one miRNA in the sample solution before separation, so the researchers could use the number of viral plaques on the host medium to calculate the concentrations of miRNAs with attomolar precision. Furthermore, when the team carried out control experiments without the miRNAs present, no plaques were found on the host bacterial medium. This, say the researchers, proves that, unlike in the case of qPCR, their new test carries no risk of false positives.

The researchers also claim that the technique is easier and cheaper than qPCR: 'For this technology, we do not need specialised equipment, unlike with qPCR,' says biochemist Chuanbin Mao of the University of Oklahoma and Zhejiang University. Mao says that conventional qPCR costs about $120 (£77) to run one sample, whereas his technique would only cost about $30. Further tests have shown that the technique could be used to test for multiple miRNAs in the same sample and was also effective on real tissue samples.

Bio-analytical chemist Gregory Weiss of the University of California, Irvine is impressed: 'They've come up with something genuinely innovative in using viruses to set up a detection scheme,' he says. He is sceptical, however, of the researchers' claims that the technique will be easier, cheaper or as fast as qPCR. ‘There are a lot of specialist steps here involving things like magnetic bead capture, and how you execute those steps makes a difference to the outcome.' Regarding cost, he says: 'We do some stuff with gold nanoparticles and magnetic microparticles and those things are darned expensive, whereas [the reagents used in qPCR] are commodity items in the lab these days.' Nevertheless, he says, 'qPCR is sequence-dependent and sometimes it just doesn't pick up the sequence, so I think there are definitely times when this will be useful’.