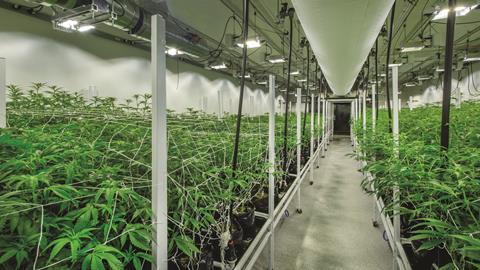 The US Drug Enforcement Agency’s (DEA) recent refusal to reschedule cannabis from its current status as an illegal schedule 1 drug might actually be a good thing when it comes to employment opportunities for chemists in America’s quickly growing cannabis industry, according to experts at the American Chemical Society’s (ACS) meeting in Philadelphia, Pennsylvania.

If the DEA had reclassified cannabis as a schedule 2 drug it would have been legal for doctors to prescribe it and would likely have paralysed America’s emerging medical and recreational cannabis industry. Current industry activity in this area would have been frozen as the details of the new order would have to be worked out. Across the US, state laws on cannabis vary greatly, so any change at the federal level would take a while to work out at the state level. The US market for legal medicinal and recreational cannabis use is currently estimated at just under $8 billion (£6.1 billion).

Chemists are in high demand as the cannabis industry continues to expand in the US and abroad. Erika Oltermann, a recent biochemistry graduate who is the membership chair of the Cannabis Chemistry Subdivision (CANN) of the ACS’s Division of Chemical Health and Safety, said that there is a real dearth of experts to, among other things, run the supercritical carbon dioxide extraction that is safer and more efficient than other cannabis extraction methods involving butane or ethanol. There are also good job opportunities in this field for analytical, purification and flavour chemists, among others, she argued.

‘I think it is almost better that they left it a schedule 1 for now,’ Oltermann told Chemistry World. ‘There would kind of be an even worse confusion,’ she says, noting that states currently have their own rules in this area. Currently, 41 of the 50 US states have some form of legalised cannabis for medicinal or recreational purposes. ‘They would have to rewrite the book … it would be a setback,’ Oltermann states.

Legal can be lethal

The US companies that offer services such as determining exact concentrations of cannabidiol (CBD), tetrahydrocannabinol (THC) and cannabinol in cannabis plants, as well as levels of pesticides, would likely have had to halt until it became clear how the new federal change would be implemented, she said. In addition, rescheduling cannabis would have almost certainly meant stiff competition from the pharmaceutical industry. Most pharma companies’ licences prohibit them from producing medicinal cannabis. The companies that are currently succeeding in the cannabis arena are tiny by comparison.

‘We don’t have to compete with Pfizer or Bristol-Myers Squibb right now because they are not in the game,’ says Ezra Pryor, the founder of CANN who is also the president of EZ Chem cannabis consultancy. ‘If marijuana were to become a schedule 2 substance, we might have to,’ he adds. ‘Maybe it is an “out of the pot and into the fire” situation.’

Another major development came earlier this month when, after 50 years of relying on one grower to produce cannabis for research purposes, the DEA announced a policy change. The sole supplier had been the University of Mississippi, under contract to the US National Institutes of Health’s (NIH) drug abuse institute. Now, cannabis can be grown in the US not only for government-funded or other academic research, but also for strictly commercial endeavours aimed at drug product development.

In a letter to petitioners earlier this month, the head of the DEA said the total number of individuals and institutions registered with the agency to research THC and cannabis and its extracts and derivatives had more than doubled during the last two years, from 161 in April 2014 to 354 at present.

‘This is an opportunity to have representative samples,’ said Pryor. ‘Because it is no longer an NIH monopoly, there can be sources of cannabis that are closer to what people are using to treat themselves.’

There can be no doubt that cannabis jobs for chemists have exploded in recent years. ‘Most chemists are facing mature industries with mature sub-disciplines of chemistry,’ Pryor added. ‘In cannabis, however, we are expanding … chemists are getting multiple offers, where most are not in that situation.’

In March, CANN had about 60 members, and Pryor expects roughly 120 members by the years’ end. That figure represents 20% of its parent division’s membership, he says.

Pryor single-handedly pushed for the creation of a stand-alone ACS cannabis division back in September 2014, and his petition has now gathered more than 600 signatures, of which at least 250 are ACS members. Only 50 ACS members are required to sign such a petition for the call to be considered, but Pryor wants at least 1000 signatures before submitting it formally.