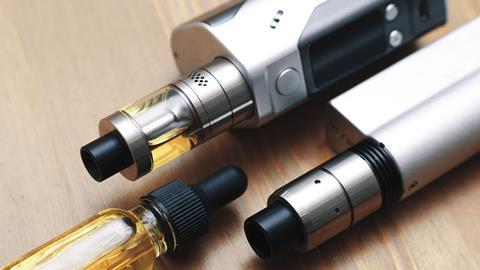 Evidence has emerged that many cannabidiol (CBD)-based cannabis products in the US are contaminated with dangerous and harmful compounds. The American Chemical Society’s (ACS) Cannabis Chemistry Subdivision (Cann) has now joined forces with the International Research Center on Cannabis and Mental Health (IRCCMH) to warn consumers, as well as chemists and researchers in the field.

A team at Virginia Commonwealth University published a study earlier this month showing that of nine commercially available CBD vaping e-liquids tested, four contained the synthetic cannabinoid 5F-ADB, an active ingredient in synthetic marijuana products such as K2 and Spice – illegal in the US and other countries around the world – that have been linked to deadly overdoses. The team also found that one of the products it tested contained dextromethorphan (DXM), which is found in some cough syrups and has been associated with psychoactive effects and various health problems.

‘There is a potential epidemic of counterfeiting CBD products and we right now know that it has been responsible for over 200 hospitalisations in the US,’ says Jahan Marcu, co-founder of IRCCMH and Cann. ‘We don’t know if this is all that there is, or if it is just the tip of the iceberg,’ he tells Chemistry World. ‘We have only seen the information really start to pour in over the last 10 months.’

The Utah Poison Control Center (UPCC) has recently flagged reports of emergency department visits associated with exposure to products labelled as CBD, a non-psychoactive compound derived from the cannabis plant. By the end of January 2018, there were 52 suspected cases of poisoning associated with CBD products. Nine products were found to contain the synthetic cannabinoid 4-CCB, but no CBD, and eight of the tested products were branded as ‘CBD oil’ but contained no information about the manufacturer or ingredients.

He and others are urging the ACS and other stakeholders to help educate consumers and chemists who work in this field to identify safe CBD products. They are further advising the ACS to contact cannabis companies and encourage them to get certifications and third party accreditations that can be included on their product labels.

‘Part of the solution is the industry saying that all legitimate companies in this arena need to adopt some sort of standards, get their processes certified and accredited and get seals from third parties on their products,’ Marcu asserts. ‘Because regulators are going to respond, and you want to clearly differentiate yourself from something linked to causing emergency room visits.’