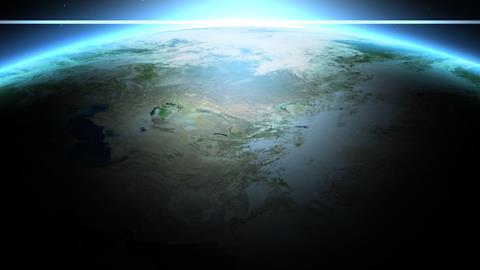 It’s plausible that carbohydrates formed on primordial Earth before amino acids. So say UK researchers who have shown that parent molecules to amino acids can catalyse the formation of 2-deoxy-D-ribose, a sugar found in the backbone of DNA.1

We’ll never know the exact process that turned chemistry into biology, but many researchers want to get as close as they can to the truth. Paul Clarke at the University of York is one of those researchers.

Now, Clarke and his colleagues have shown that amino nitriles, precursor molecules to amino acids, can promote aldol reactions between formaldehyde, acetaldehyde and glycoaldehyde – molecules known to be present on prebiotic earth and in interstellar ices – to make carbohydrates, including 2-deoxy-D-ribose. ‘This is the first time anyone has shown you can make 2-deoxy-D-ribose in potentially prebiotic conditions,’ comments Clarke. ‘The fact that we can use amino nitriles to catalyse this reaction raises the interesting possibility that carbohydrates may have formed on early Earth before amino acids. We’re not saying they did, but it’s a possibility.’

Clarke has previously shown that simple amino esters can catalyse aldol reactions2 so half expected them to promote aldol reactions between formaldehyde, acetaldehyde and glycoaldehyde, which they did. He hadn’t, however, anticipated that amino nitriles would work just as well. ‘The nitrile functional group is quite reactive, it can be hydrolysed by water, it can be reduced, so we were surprised that it stayed around in the reaction mixture long enough to do the chemistry,’ he adds.

‘The prebiotic origin of sugars, particularly of ribose, is still unclear. The formose reaction generates a mixture of sugars and ribose is not the main component. This is certainly a big knowledge gap. All science to do with creating nucleosides prebiotically, with ribose as a key building block, has this problem,’ says Thomas Carell, a nucleic acid chemist at the Ludwig Maximilian University of Munich in Germany. ‘Totally unknown is how 2-deoxy-D-ribose may have formed prebiotically. Right now everybody believes everything started with RNA and that DNA evolved later. Maybe this is wrong and 2-deoxy-D-ribose was there from the beginning. In this respect the research is very interesting. It opens a potential prebiotically relevant pathway to 2-deoxy-D-ribose.’