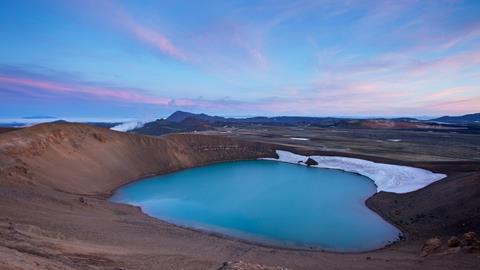 Researchers have identified two linked, enzyme-free reaction cycles that could have jumpstarted metabolism in ancient organisms.

Theories about the origin of life envision creating sugars, proteins and nucleic acids for early cells using self-sustaining cycles of chemical reactions. Typically, researchers look to modern biochemistry for clues to cycles that could be primitive precursors to metabolism.

One metabolic cycle of particular interest is the citric acid (TCA) cycle. This nine-step cycle effectively converts acetate generated from the breakdown of fats, sugars and proteins into carbon dioxide. At the same time, it also produces energy and building blocks for some amino acids. Run in reverse, it consumes carbon dioxide to assemble carbon chains.

Researchers have recreated specific transformations from several metabolic pathways under prebiotically plausible conditions. However, these steps do not connect to form cycles, leaving the beginning of metabolism a mystery. ‘But if you focus on the chemistry, the questions of origins of life become less daunting,’ says Ramanarayanan Krishnamurthy at the Scripps Research Institute, US.

Rather than using prebiotic reaction conditions to generate products found in a modern metabolic cycle, a team led by Krishnamurthy and Greg Springsteen, at Furman University, US, looked for molecules present on early Earth capable of two key reactions in the TCA cycle, an aldol addition and oxidative decarboxylation. 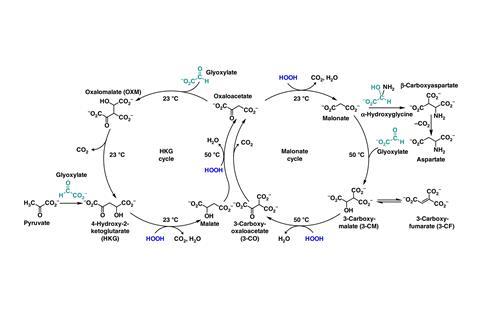 Two linked, enzyme-free reaction cycles share some intermediates, molecular inputs and products with the modern citric acid cycle, which organisms use to turn fats, proteins and carbohydrates into chemical energy

The researchers mixed glyoxylate, the smallest α-ketoacid, with malonate, the smallest α-dicarboxylate, in aqueous buffer. Then they added hydrogen peroxide to the product of that aldol reaction and heated the mixture to 50°C, triggering a series of oxidation and decarboxylation reactions that regenerated malonate after 48 hours. An intermediate in that cycle, oxaloacetate, can also react with glyoxylate, beginning a second cycle of peroxide-catalysed oxidation and decarboxylation reactions linked to the first.

All four reactions in each cycle operate under plausibly prebiotic conditions – aqueous buffer at near neutral pH and mild temperatures of 23 or 50°C – and some components resemble modern metabolism. The enzyme-free cycles share two intermediates with the modern TCA cycle and can also use pyruvate as a starting material. And like the modern cycle, they produce aspartate, a building block for some amino acids.

‘It is generally believed that enzyme-free prebiotic reactions typically go wild and produce many side products,’ says Pasquale Stano, an organic chemist at the University of Salento, Italy. ‘Finding a chemical cycle that proceeds enzyme-free, with few or no side products, and is also similar to a known biochemical cycle is indeed exciting.’

The products of prebiotic, enzyme-free reactions are thought to have guided the evolution of enzyme catalysts. ‘This paper goes a step further,’ says Markus Ralser, who studies the molecular biology of metabolism at the University of Cambridge, UK. ‘Not only could these reactions have templated the selectivity of the first enzymes, but they could also drive a prebiotic metabolic cycle all on their own.’