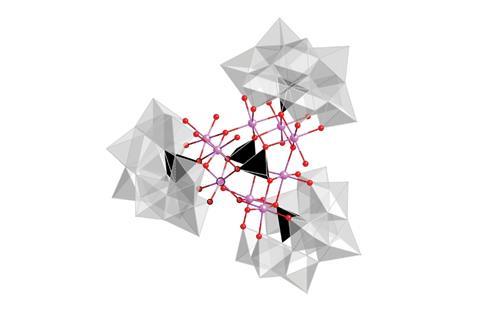 The structure of the cobalt-based polyoxometalate that can split water in acidic conditions that usually degrade other Earth-abundant catalysts (cobalt, pink; oxygen, red; WO6, grey octahedra; phosphate, black tetrahedra

Splitting water to produce hydrogen is one renewable energy vision of the future. But the best catalysts are made from the rarest, priciest metals and cheap, abundant metal catalysts can’t cut it in the acidic environment that comes from splitting water. But adding a simple carbon paste to a polyoxometalate containing Earth-abundant metals has created the first catalyst of its kind that can not only survive the harsh acidic conditions of water splitting, but is as good as its costly peers.1

Researchers are currently working hard to develop catalysts that can split water into oxygen gas and protons. The fastest, most stable and energy-efficient water oxidation catalysts contain iridium oxide. But since iridium is among the scarcest elements on the planet, it’ll never make a big contribution to clean energy generation.

There are water oxidation catalysts made with Earth-abundant elements such as cobalt, nickel and manganese. But the most active cobalt- and nickel-based catalysts dissolve at low pH, acidic conditions naturally generated during water oxidation where hydrogen production is easiest and fastest. Earlier this year, Daniel Nocera, at the Massachusetts Institute of Technology, US, reported acid-stable cobalt oxide films mixed with manganese.2 And researchers continue to search for catalysts with the right combination of stability, abundance and activity at low pH.

Now a team led by J R Galán-Mascarós, at the Institute of Chemical Research of Catalonia in Spain, has looked to cobalt-containing polyoxometalates (Co-POM) as acid-stable catalysts for water oxidation. This anionic catalyst contains a nugget of cobalt oxide bound to inorganic phospho-tungstate ligands. The researchers precipitated the Co-POM as a barium salt, and then they mixed the solid material with carbon paste to form an electrode.

The cobalt oxide catalyst would typically dissolve in these reaction conditions, but the carbon paste – a mixture of conductive black carbon and a hydrocarbon grease binder – stabilises it. The idea of using a hydrophobic binder to stabilise a catalyst may extend to other water oxidation catalysts too, Galán-Mascarós says. But he notes that they need to find another binder to improve the mechanical stability of the electrodes because carbon paste flakes into the solution.

‘The combination of a cobalt-containing polyoxometalate and carbon paste looks like a promising new development,’ says Gary Brudvig, who studies water oxidation catalysts at Yale University, US. Since cobalt-containing POMs are known to decompose into cobalt oxide, he wonders what the catalytically active species is in this material. Characterising the precise atomic structure of the catalyst on a surface is an ongoing challenge for the field, Brudvig notes.