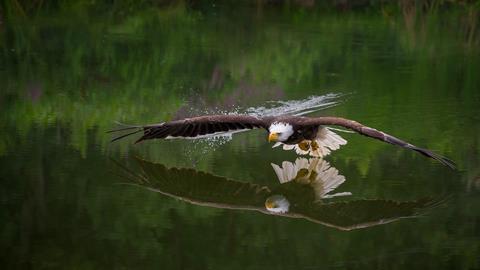 Chemical forensic work has solved the decades-old mystery of why bald eagles and other US wildlife have been dying of a severe neurodegenerative disease. The scientists have determined that the culprit is a neurotoxin produce by cynanobacteria that grow on invasive aquatic plants. 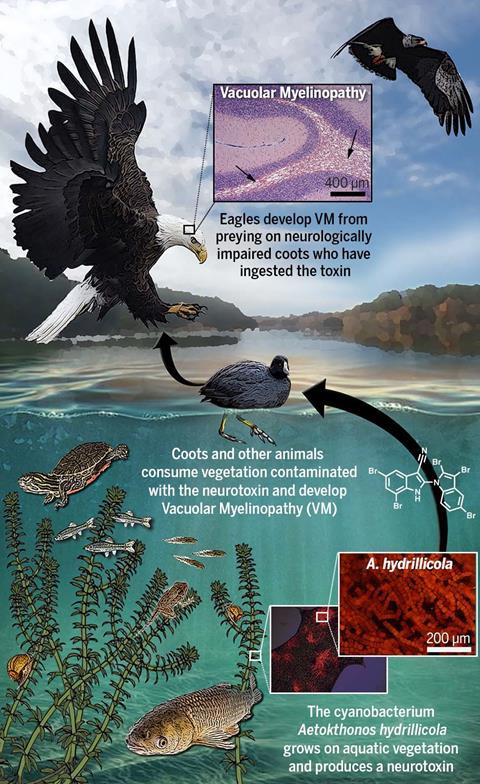 Study co-author Susan Wilde, an aquatic scientist at the University of Georgia, identified the previously unknown cyanobacterium that appeared to cause the disease known as avian vacuolar myelinopathy (AVM) on the leaves of Hydrilla verticillata in 2005. She named the bacterium Aetokthonos hydrillicola – ‘eagle killer that grows on Hydrilla’. At least 130 bald eagles have died since the discovery of AVM in 1994, and the figure covers just the recovered and properly diagnosed birds, so the real number of fatalities is likely higher.

Timo Niedermeyer, a natural product chemist now at the University of Halle-Wittenberg in Germany, a co-lead on the paper with Wilde, first analysed Wilde’s samples in 2013 when he worked at the University of Tübingen. It took about 18 months to culture the bacterium, but the tests came back negative – there was no toxin. ‘It turned out that the strain we cultivated didn’t produce any toxin, so that was a huge disappointment,’ Niedermeyer recalls. ‘Then we played with cultivation conditions and we still could not get the cyanobacteria to produce the toxin.’

It wasn’t until he moved to the University of Halle-Wittenberg in 2017 that the breakthrough came. After Wilde sent some additional samples of Hydrilla from a lake where there was an AVM outbreak, tests in Niedermeyer’s new lab using a more sensitive imaging mass spectrometer found a new substance that is only made on the leaves where the cyanobacteria grow, but is not produced by cultured bacteria.

Further analysis revealed the presence of a brominated molecule. Hydrilla accumulates bromide from water, so it supports toxin formation by creating a bromide-enriched environment. ‘It was a real surprise to see that the production of this toxin really depends so strongly on bromide, which usually is not found in a high concentration in fresh water,’ Niedermeyer tells Chemistry World. ‘That was the eureka moment, and then we added bromide into the medium and the cyanobacteria started producing the toxin seen in the leaves from the lake.’

Aetokthonotoxin, the cyanobacterial toxin responsible for the animal deaths, is unusual among natural products for being heavily brominated

The compound – named aetokthonotoxin, which means poison that kills the eagle’ – was then shown to trigger AVM. ‘We now know who is the killer, the cyanobacteria, and we know its weapon, the toxin, but now we need to find out where the bromide comes from, and the molecular mechanism of this toxin,’ Niedermeyer says. AVM causes brain lesions and is highly toxic to not only eagles, but to other birds, fish, turtles, nematodes and more. Whether the toxin represents a threat to mammals is unknown.

Hans Paerl, an environmental sciences professor at the University of North Carolina institute of marine sciences who was not involved in the study, says this international team ‘did some really good biochemistry’ that highlights the complexity of these compounds and their toxicity.

Tip of the iceberg

Paerl points out that the findings are consistent with the conclusions of the Botswanan government in September 2020 that the death of hundreds of elephants was likely due to cyanobacterial neurotoxins, as well as a report from Brazil in 1996 of more than 70 people dying as a result of cyanobacteria-contaminated water. 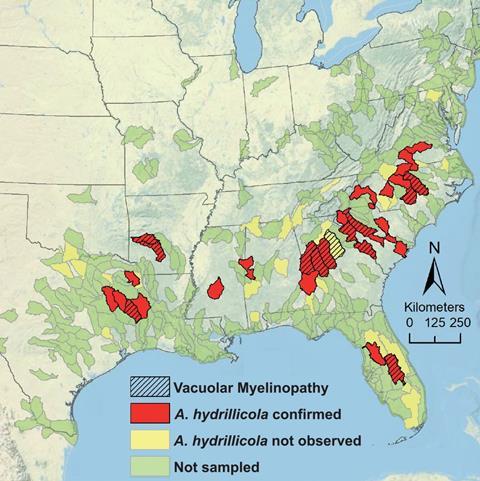 Animal deaths have occurred from the neurodegenerative condition vacuolar myelinopathy across the southern US and coincide with the presence of the invasive plant A. hydrillicola

‘We are just seeing the tip of the iceberg,’ he warns. ‘I think that we are going to see more of these linkages between secondary metabolites that are produced and have a direct impact on organisms ranging from plants to mammals.’ He emphasises that Aetokthonos hydrillicola has specialised cells that can fix atmospheric nitrogen. ‘Organisms like the one that has been described are likely to be proliferating in different places if they can get a foothold because they are not limited by nitrogen availability,’ he explains.

Greg Boyer, a chemist at the State University of New York, is similarly concerned. ‘Hydrilla verticillata is a very invasive species here in New York state in the Finger Lakes,’ he says. ‘We have a huge eagle population up here, and if the Hydrilla verticillata expands and if the cyanobacteria comes with it, it could be really quite devastating up here – it has the potential to be really ugly.’