Greener plastic made from leftover fish guts and bones 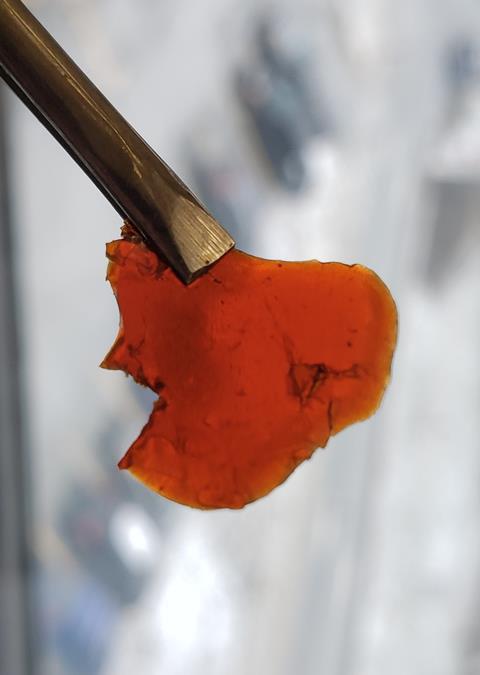 Using fish oil researchers have made a polyurethane-like material

A safer and more environmentally-friendly polyurethane-like polymer has been created using fishery and aquaculture waste. The work, led by chemistry professor Francesca Kerton from Memorial University of Newfoundland in Canada, was presented at the American Chemical Society’s virtual spring conference.

Polyurethane production typically requires crude oil and toxic phosgene, and the synthesis generates isocyanates, which are skin and respiratory irritants. The material isn’t biodegradeable either, and carcinogenic compounds can be released from the limited breakdown that does occur.

Amid a push for greener alternatives, Kerton and colleagues turned to extracted oil from fish remains such as guts, bones and skin as her university is located in a region where salmon farming is a major industry. Consequently, the team has developed a three-step method for making a fish-oil based plastic. First, they use hydrogen peroxide to oxidise the fish oil, then they react it with carbon dioxide and finally they react it with an amine. The final product is a film-like material with an orange or red colour that is slightly stretchy with no fishy odour.

The team began with an amine made from cashew nutshell waste, a commercially available material, but since then graduate student researcher Mikhailey Wheeler has successfully swapped that out for amino acids, which simplifies the chemistry involved. Preliminary results suggest that histidine and asparagine could substitute for the cashew nutshell-derived amine by linking together the polymer’s components. So far, the largest piece of plastic that the team has created is a film up to 3cm2.

To determine the biodegradability of the new plastic, the researchers examined the surface with an electron microscope under a range of conditions. It turned out that the material quickly swelled by about 10% after being placed in water, with holes appearing. The degradation process was dramatically accelerated with the addition of a lipase enzyme – small cracks formed on the surface and microbes, fungi and bacteria began growing on it within a week.

‘This degrades faster than conventional polyurethanes because the lipid, the fish oil, we are using as a building block contains esters, and that group is fantastic for encouraging biodegradation because they are very easy to do a hydrolysis reaction on and that starts to break apart carbon–oxygen and carbon–carbon bonds in the structure,’ explained Kerton. ‘The material should break down back to something similar to the fish oil.’

Because many petroleum-based polyurethanes have lots of aromatic groups in the backbone that gives them a certain amount of rigidity that the new material doesn’t have. ‘Compared to some polyurethanes, our material will be less hard or tough, but at the same time more stretchable to be like a saran wrap or other films used for wrapping across a surface,’ Kerton said.

These alternative polyurethanes show similar degradation properties and potential applications as other biodegradable plastics made from soybean.

Just 1g of the fish waste oil can produce about 1.4g of plastic, depending on the amine being used, according to Kerton. The larger the mass of the amine, the less fish oil is needed in the material.

The team’s calculations, based on UN figures on the average amount of waste from fisheries around the world, suggest that there is enough fish waste globally to satisfy demand for polyurthane production.

Kerton and colleagues are still in the process of characterising the mechanical properties and other features of these novel plastics, but applications could include weather-proof clothing, food-packaging and wound dressings. Toxicology and safety studies are needed before such routes can be pursued, the researchers note.

They hope to convince the provincial or state government to help build a pilot plant to scale up the production of these plastics. ‘We are looking at maybe two to three years to have a pilot plant, and if that is successful maybe five years or so until we would actually have product on the market,’ she told the conference.