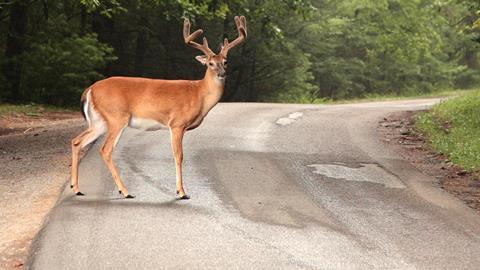 ‘I did have to go home for an extra shower one day – it turns out that you can’t necessarily get away completely unscathed after swabbing a skunk,’ recalls Robert Cichewicz at the University of Oklahoma, US. For the last three years Cichewicz and Bradley Stevenson have been leading a rather unusual research project, daily patrolling a 30 mile stretch of an Oklahoma state highway. The team of chemists and microbiologists are on the lookout for roadkill. Their macabre task is swabbing dead animals they find by the side of the road to get hold of their microbiomes – the communities of microorganisms that inhabit these mammals. The researchers are hoping to uncover new molecules, perhaps even potential drug candidates, produced by bacteria isolated from these roadkill and they’ve already had some success.

‘Conceptually the idea was launched in terms of microbiomes having this amazing potential, harbouring so many different microorganisms – many of which are producing natural products that could influence health and wellbeing,’ explains Cichewicz. With several research groups already looking at human microbiomes, the team decided that other mammalian systems had been overlooked.

But that brought a new problem – how were they going to get samples? Keen to avoid the minefield of legal and ethical issues that surround live animal testing, Cichewicz and Stevenson realised that the solution was staring up at them every day on the drive to work. ‘The light bulbs came on and we realised just what an opportunity it was to have this sampling programme that revolved around roadkill,’ recalls Stevenson. ‘You know – the resources are there. We make something out of the tragedy that has fallen upon this poor animal. We’re trying to make something good out of it.’

These somewhat extreme measures are well worth a little queasiness, a second shower, or periodic attacks of the shivers. All in the name of science

Under Oklahoma law, however, animals that have died on the roads are considered state property. To be able to touch the roadkill, the research team needed to first get a scientific collectors’ permit. Then came another hurdle. ‘If we took possession of it we were informed that we would then be subject to USDA [US Department of Agriculture] law because it is an animal carcass,’ says Cichewicz. ‘So we did all of the sampling roadside.’

The team would patrol the highway at 10 hour intervals to search for fresh roadkill. Carcasses deemed fresh and with at least one remaining intact orifice (mouth, nose, ear, eye, rectum or gastrointestinal tract) were sampled with sterile swabs. However, this wasn’t always straightforward. Cichewicz remembers having to drive a graduate student back to the lab one day: ‘It was just that squeamishness of: “You want me to stick a Q-tip where?”’

Bring out your dead

Following the roadside testing, a newly developed discovery pipeline helped identify molecules of interest. A single animal could provide multiple samples, each of which could lead to hundreds of bacterial isolates and compounds. Swabs taken from armadillos, deer, opossums, racoons, skunks and squirrels eventually led to the isolation of almost 4000 different bacteria. To narrow the search, the team used a mixture of chemical techniques, including laser ablation electrospray ionisation mass spectrometry, bioassay testing and genomic analysis to target biologically active metabolites. 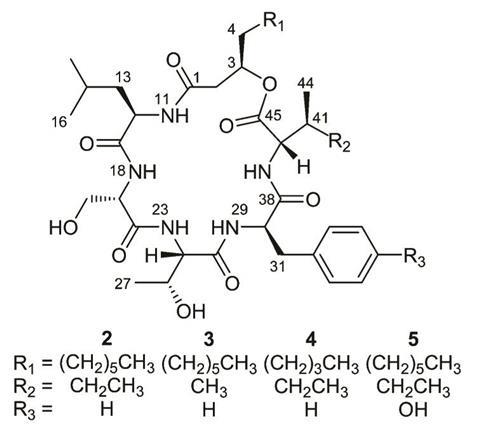 The researchers found some bacterial natural products that had been isolated before, such as serrawettin W2 (2) and a number of others that were unknown to science

‘One of the beauties of the study is that now we’ve got multiple approaches to the discovery process,’ explains Stevenson. ‘If it’s direct chemistry on a colony, or compounds detected from isolated organisms, we know where we’re likely to find a hit.’

Demonstrating the potential of the process, a selection of cyclic lipodepsipeptides produced by two bacterial isolates that the team obtained from an opossum’s ear, were shown to limit biofilm formation by fungal cells associated with yeast infections.

‘There is growing recognition that the human microbiome offers an untapped source of bioactive natural products with potential applications in human medicine,’ says Greg Challis, a natural product chemist based at the University of Warwick, UK, noting the recent discovery of lugdunin – a molecule produced by a bacterium found in the human nose which demonstrates antibiotic activity against MRSA. ‘The idea of Bob Cichewicz and co-workers to exploit roadkill to access hitherto underutilised non-anthropoidal microbiome constituents, in the hope that they may also produce novel bioactive natural products, is therefore rather ingenious.’

‘The opportunistic sampling strategy gives access to a diverse range of microbiomes containing novel microbial species, which in turn provide new chemistry,’ agrees Marcel Jaspars, an organic chemist from the University of Aberdeen, UK. ‘[This] work goes to show that there are sources of novel microbiology and chemistry on our doorstep we don’t normally consider.’

Cichewicz explains that working with isolates from roadkill microbiomes also brings a degree of safety that wouldn’t necessarily be present with novel compounds originating from non-mammalian sources. ‘Could you now transfer that biosynthetic pathway to an organism, get that into a human, and therefore create a more efficient, better type of microbiome?’ he asks. ‘That’s the big dream here, but I don’t think the science is all that far off.’

The unorthodox sampling method certainly raises eyebrows and regularly piques interest at social gatherings and dinner parties. ‘Generally as a microbiologist, as soon as you tell [people] what you do, the conversation kind of dies off,’ says Stevenson. ‘Now people seek me out and want to talk about the work. So I’ve kind of gained a little bit of a following.’ Cichewicz agrees, pointing out that all members of the team have become well versed in recounting their ‘sampling horror stories’.

Horror stories they might be, but Cichewicz emphasises the serious nature of the project: ‘We really feel that finding new and novel drug candidates is such a critical need for society that these somewhat extreme measures are well worth a little queasiness, a second shower, or periodic attacks of the shivers. All in the name of science.’