When chemists choose whether to run a reaction in a round-bottom or an Erlenmeyer flask, they might think along the lines of ‘Does this reaction need to be carried out under an inert atmosphere?’ or ‘Will I need to recrystallise the product?’ Considering how the container influences the course of a chemical reaction, doesn’t tend to come into play.

In a round-bottom flask, encounters between molecules are ‘random, short-lived and constantly saturated by a swirling sea of solvent’, write Pablo Ballester, Makoto Fujita and Julius Rebek in a 2014 editorial.1 But when reagents are confined inside molecular flasks – structures so small they barely fit a few individual molecules – their behaviour can change dramatically.

Molecules twist and fold into unusual shapes to fit inside a nanosized container, concentration increases by factors of up to 10,000, and unstable intermediates become less unstable as they are shielded from the outside world. At the molecular scale, interactions between container and contained molecules become ‘prearranged, prolonged and private’, Ballester, Fujita and Rebek write. 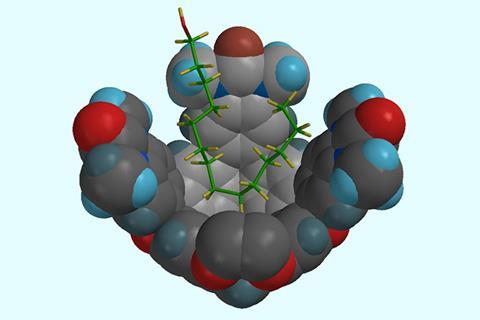 Cavitands can act as templates for synthesising large-ring heterocycles. Functional groups that are far apart in long-chain molecules can end up very close together when folded in a cavitand 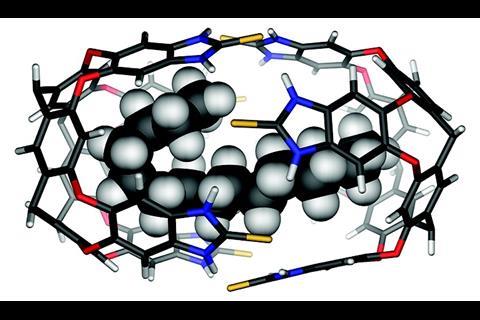 It is these extreme confinement effects that ‘enables us to do chemistry that we can’t do in traditional ways’, says Angela Grommet from the Weizmann Institute of Science in Israel who recently wrote a review2 on the topic. After 35 years of research, chemists are now starting to unlock the potential of confinement by designing molecular cages that fold up long molecules into huge macrocycles, or creating cavities that can separate deuterium from hydrogen. In the future, confined spaces could rival enzymes in their ability to catalyse reactions or protect unstable species, turning them into useful reagents.

It all started with the discovery of carcerands more than three decades ago. Donald Cram wanted to take the chemistry of crown ethers – flat, circular molecules that can capture individual metal atoms on their inside – into the third dimension. In 1985, he functionalised big cyclic molecules so pairs of them could be brought together to form a capsule. Cram called these hollow cage molecules carcerands, from the Latin word for prison, because they could permanently entrap other smaller molecules such as argon and dimethylformamide.

In 1987, Cram received the chemistry Nobel prize together with crown ether discoverer Charles Pedersen and Jean-Marie Lehn who coined the term supramolecular chemistry. Their dream was to create molecules that mimic enzymes – recognising, capturing and transforming other molecules – without being nearly as complicated. The emerging field of supramolecular chemistry suddenly made it possible to engineer close interactions between molecules in the lab, a topic that had previously been biologists’ domain.

I think in the next 10 years, I’d like people to really look at confined spaces and see the potential for them to be like artificial enzymes

Angela Grommet from the Weizmann Institute of Science

‘The idea of encapsulating molecules inside molecules and then bringing about a conversion has been something that’s been thought about at least since the first enzyme–substrate crystal structure was solved,’ says Bruce Gibb from Tulane University in the US where he works on supramolecular nanocapsules. Enzymes have mastered the concept of confining reagents into a nanosized space to bring about a particular reaction. But they are limited by their often incredibly narrow substrate range – and usually don’t do well under the harsh conditions of synthetic transformations. ‘Something that maybe doesn’t have quite the performance of an enzyme, but you can toss into a lot of different reactions, I think that is the space that confined spaces could very easily occupy,’ says Grommet.

A first proof of cage molecules’ potential for drastically changing reactivity came in 1991, in Cram’s study The Taming of Cyclobutadiene.3 A strained, antiaromatic and highly unstable compound, cyclobutadiene reacts with anything and everything, including itself. Cram’s team managed something that had so far only been possible in frozen argon at –265°C (8K): they captured free cyclobutadiene. Encased in a carcerand too small to fit more than a single molecule, cyclobutadiene was stable at room temperature.

‘Since the mid-90s, there has been a drive to make bigger hosts that assemble in a dynamic way so that guests can be encapsulated, converted and then thermodynamically kicked out,’ says Gibb. In 1994, Rebek from the Scripps Research Institute, US, and Javier de Mendoza from the Institute of Chemical Research of Catalonia in Spain introduced dynamic containers with a tennis ball-shaped assembly held together by hydrogen bonds.4 ‘The problem was that the cavity inside the tennis ball was just big enough to put one methane molecule,’ says Gibb. ‘Since then, a big push has been to make hosts bigger.’

Now, cage molecules large enough to hold compounds with around 20 non-hydrogen atoms have become routine. In November 2020, researchers reported the largest organic capsule ever made with an inner diameter of 4.3nm. As time went on, chemists like Fujita from the University of Tokyo in Japan started to create organometallic coordination cages. Instead of painstakingly having to synthesise every single bond, these capsules self-assemble out of metal ions and organic ligands.

But it is only recently that cages have seen applications in synthetic chemistry. This is because ‘supramolecular chemistry is hard’, laughs Anna Slater who works on organic cages at the University of Liverpool, UK. ‘You’ve got to think about a lot of different weak interactions.’ Unlike crown ethers that bind ions though electrostatics or halogen bonds, host–guest interactions are entirely based on van der Waals forces. In his 1991 cyclobutadiene study, Cram and colleagues went as far as saying that trapped molecules should be regarded as an entirely new phase of matter. They argued that the cages’ inside is independent of whether the cages exist in solution, solid or gas phase.

Indeed, when cramming molecules into other molecules ‘some really weird stuff happens’, says Rebek. ‘Molecules fold to fit into cavities, they’ll assume unusual shapes, even simple linear molecules will curl up into helices.’ ‘If you put water in a very confined space, it is not going to be discrete as what we think of liquid or vapour, or collectively bonded like ice,’ adds supramolecular chemist Shaodong Zhang from the Shanghai Jiao Tong University in China.

On a basic level, a cage contains an extremely concentrated solution. With the inside of a cavity up to 10,000 times more concentrated than a bulk solution, reactions between two molecules are simply more likely to happen. The other way confinement alters reactivity or selectivity is by geometric constraint.

Long-chained molecules, for example, fold themselves up to fit into cages. This inevitably brings the molecules’ tails closer together, so remote end groups behave like neighbouring groups. Rebek’s team used this principle to increase cyclisation yields inside molecular bowls up to 10-fold compared with the same reaction in solution.5 ‘We can make up to 25-membered rings, stuff that’s really hard to do without this sort of pre-organisation,’ Rebek says.

More recently, a team led by Fujita and his Tokyo colleague Hiroki Takezawa trapped amides inside a molecular cage small enough to twist them out of shape, making them up to 14 times more reactive in a hydrolysis. ‘Essentially, what the cage was doing, was stabilising something that was like a transition state for this molecule, which is similar to the way in which enzymes stabilise transition states,’ explains Grommet. 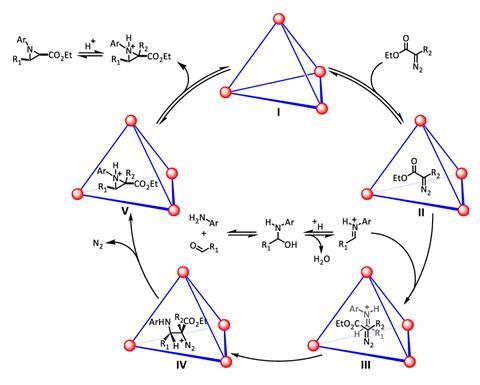 One of the most complex transformations ever carried out inside a cage was reported by Ken Raymond, Robert Bergman and Dean Toste, a long-time supramolecular chemistry collaboration at the University of California, Berkeley, US. They used a gallium coordination cage, nicknamed Raymond tetrahedron, to catalyse a three-component coupling reaction.6 More than a simple catalyst, albeit one that increases yields up to 12-fold, the tetrahedron also inverts the reaction’s stereoselectivity. In bulk solution, the product created is the opposite stereoisomer to the one generated inside the cage.

One could argue that cage molecules are nothing more than individual pores of a holey material like metal–organic frameworks (MOFs). However, discrete molecules give chemists more design choices – and they have distinct advantages over materials when it comes to processing, says Slater. ‘One of the challenges with using a MOF as a porous substrate is they’re not often very soluble, they’re quite difficult to get into a membrane or into a column, so you can use them for separation.’

And it’s with some of the toughest separations that cages have shown what might be to come. One of chemistry’s greatest separation challenges, says Rebek, is xylene. The dimethylbenzene is an industrial precursor made from cracking petroleum. It comes in three regioisomers whose boiling points are only a few degrees apart, so separating them requires a lengthy and energy-intensive distillation. Rebek’s team created a palladium cavitand that captures para-xylene, but not the two other isomers, with unprecedented selectivity.7

Despite the advances, however, cages have not found widespread research or industrial uses apart from simple cyclodextrins, which entrap odours in products like Febreeze. Most cages are still ‘too expensive, too complicated’, says Zhang. But this might change with the introduction of glucose-detecting cages.

At the University of Bristol in the UK, Anthony Davis and his group created organic cages that trap glucose out of a soup of very similar sugars.8 In 2014, Davis and Harry Destecroix, then PhD student in Davis’ lab, funded Ziylo, a company focused on commercialising the research. The ideas was to create a type of insulin whose activity is modulated by a sugar sensor. ‘That may revolutionise diabetes treatment,’ says Slater. In 2018, Ziylo was bought by pharmaceutical company Novo Nordisk in a deal that could ultimately be worth up to £620 million.

For now, researchers are pushing further to unlock cage’s catalytic potential. ‘I think in the next 10 years, I’d like people to really look at confined spaces and see the potential for them to be like artificial enzymes,’ says Grommet. But for this to happen, cavities have to become more asymmetric, more flexible, more enzyme-like, she explains. Enzyme’s binding pockets often adapt their geometry over the course of a reaction, both for optimal catalytic activity and to release the product once their work is done.

One way people are trying to design flexible cages is by building them from light-responsive units. In 2018, Michaele Hardie’s team at the University of Leeds, UK, designed a cage containing azobenzene.9 Under laser light, these molecules switch from their E to Z form, creating the largest structural change ever reported in a cage. A year later, Guido Clever’s group at the Technical University of Dortmund, Germany, built a photoresponsive container that expels its guests when switching to a closed form.10 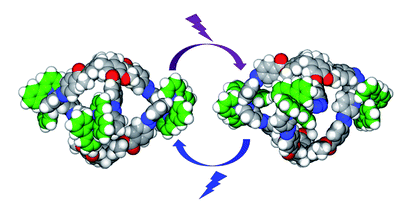 Photo-irradiation this cage with a high energy laser results in E → Z photo-isomerisation of the pyridyl-azo-phenyl groups with up to 40% of groups isomerising. When Hardie’s team reported such cages in 2018 they represented the largest photo-induced structural change in a structurally-integral component of a coordination cage

But molecular confinement is still a mostly serendipitous science, says Zhang. Chemists not only have to think of the shape of the molecules they want to encapsulate, there’s also an aspect of kinetics – whether guests bind strongly, quickly, reversibly. Even the solvent has to be considered as it often competes with guest molecules for space inside the cage, says Slater.

But the principles underlying host–guest supramolecular chemistry are shared across a lot of other fields that look at confining molecules, including porous materials, micelles, nanoparticles and even surfaces, Grommet points out. Scientists are ‘almost co-discovering a lot of stuff but they also have very different perspectives’, she says. ‘I’m really interested in getting people from very different backgrounds, but who are all interested in confinement, to start talking to one another.’

Thanks to Ramamoorthy Boomishankar from the Indian Institute of Science Education and Research, Pune, for helpful discussions and for sending me a collection of recent research papers.