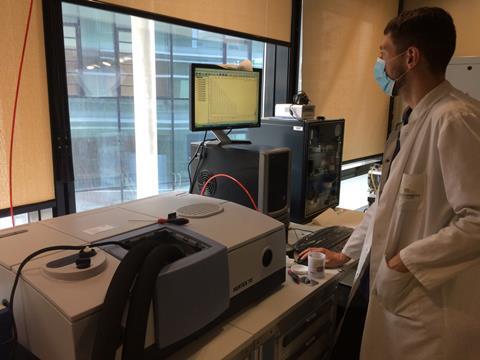 Vacuum field catalysis is totally counter-intuitive. It can change the rate of a reaction simply by placing the reactants between two mirrors that are separated by mere nanometres in some cases – no chemical catalyst is added

‘People thought what we did was totally wacky,’ recalls Thomas Ebbesen from the University of Strasbourg in France. ‘When we tried to submit [our 2012 Angewandte Chemie] paper,1 there was one referee report that was very short and simply said: “This is not science, this is science fiction”.’

For many, Ebbesen’s study might indeed sound like make-believe. His team showed it could change the rate and yield of a photoisomerisation reaction by – instead of carrying it out in a beaker – putting it in a small space between two mirrors. The space contained no chemical catalyst, nothing obvious that might make this possible. What the researchers did is tap into the power of the vacuum field, a weird quantum mechanical soup that surrounds everything.

‘2012 was an eye-opener for everyone,’ says Felipe Herrera who leads a molecular quantum technology group at the University of Santiago, Chile. ‘Nobody believed this, and people spent maybe two or three years until they could reproduce the results.’

Although vacuum-field catalysis is still in its infancy and doesn’t have any practical applications yet, it could bring catalyst-free catalysis, ultra-selective carbon dioxide reduction and new photosensitisers. It might become a powerful tool to steer chemical reactions akin to photocatalysis. ‘I think this field is going to have far-reaching implications,’ says Herrera.

A new kind of chemistry

‘It is the view of modern physics that there is no such thing as truly empty space,’ wrote physicist Brian Skinner from Ohio State University, US, on his blog over a decade ago. Physicists discovered that the universe is filled with an energetic soup, boiling and bubbling with particles that appear as fast as they disappear. Although this almost sounds like a ridiculous return to the long-discarded aether theory, experimental results – like the Casimir effect – have long since established the vacuum field’s existence. 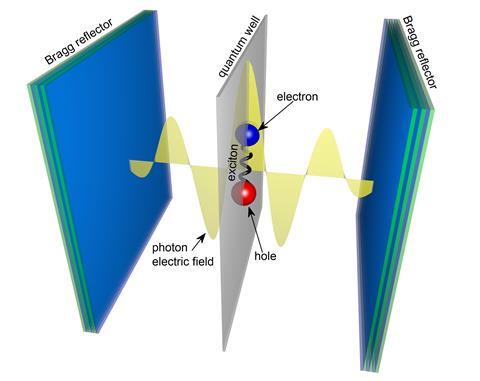 But what has been firmly in the realm of physics is now starting to interest chemists, who hope to one day catalyse reactions with this vacuum field. They do this by creating polaritons, hybrid particles that are part light, part matter. They form – even in the absence of light – when molecules strongly interact with the so-called virtual photons spontaneously thrown up by the vacuum field.

Creating polaritons out of light and matter is not unlike creating a molecule out of two atoms, Herrera explains. Bring two atoms close enough together and they form a molecule, a new entity with new orbitals, and new chemical properties. Similarly, polaritons often have dramatically different reactivities to their parent molecules – so dramatic in fact that they could be likened to a new state of matter.

Although a small field, it has seen an uptick in attention from the scientific community. According to Web of Science, the number of studies containing the keyword ‘molecular polariton’ has doubled, rising from less than 25 in 2017 to more than 50 in 2019. Since the start of the Covid-19 lockdown, around 200 scientists have been attending weekly webinars on polariton chemistry hosted by researchers at the University of California San Diego, US.

‘I think this field will open many minds, especially among experimental chemistry colleagues,’ says Herrera. ‘That’s why I like this field so much, because it’s a bridge between maybe 50 or 60 years of quantum optics and perhaps 100 years of physical chemistry.’

Making molecules interact with the vacuum field is as easy as putting them in a cavity. Simply put, optical cavities consist of two mirrors facing each other and separated by only a few nanometres in some cases. Cavities are a major component of lasers where they form a resonator for light waves. But in the dark, they can be used to create polaritons. ‘Free space is infinite and vacuum field fluctuations are very tiny, which is why we don’t see strong coupling in free space,’ Herrera explains. ‘If you confine the field into tiny spaces, then these vacuum fluctuations are very large.’

The cavity’s size dictates the wavelength of the virtual photons that can live inside it. Matching this wavelength to be resonant with a molecule’s bond vibration or an electronic transition creates the conditions for light–matter mixing, forming molecular polaritons. 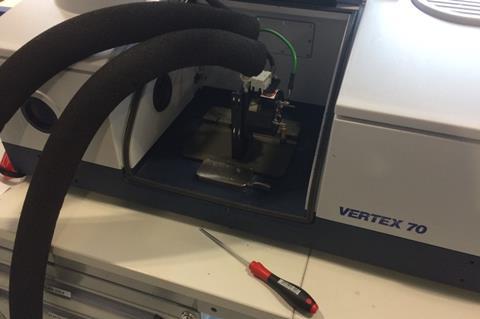 An experiment to create polaritonic states might seem surprisingly crude: silver-coated glass slides serve as mirrors sandwiching a layer of target molecules. The setup is held together with screws, so the cavity’s resonance frequency can be fine-tuned by minutely changing the mirror-to-mirror distance with a screwdriver.

Before 2012, physicists had modified molecules’ optical properties – like light emission rates – in this way. But Ebbesen’s team showed for the first time that sticking molecules inside a cavity can also alter their chemical properties. It was a proof of concept, and other studies conducted since hinted at the tantalising prospect of controlling chemistry in an entirely new way. ‘It was revolutionary, certainly challenging how we think about chemical reactions,’ says Wei Xiong who works on ultrafast spectroscopy at the University of California San Diego in the US. 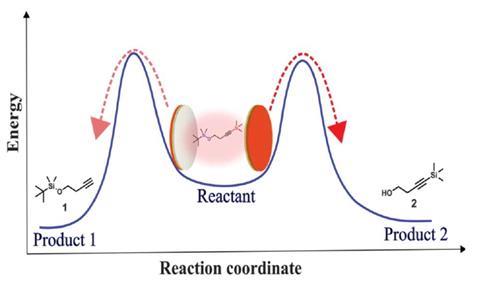 Although synthetic chemists might not see cavity catalysts in the catalogues of their favourite chemicals suppliers anytime soon, there has been progress in the field. In a preprint published in 2018, a team around Hidefumi Hiura from Japan’s NEC Corporation reported a 10,000-fold increase in the rate of ammonia borane hydrolysis when it was put inside a cavity containing water polaritons.2 Last year, the groups of Ebbesen and Strasbourg colleague Joseph Moran showed how coupling to the vacuum field changes the product ratio in a reaction that can produce two different products.3 And earlier this year, scientists led by Kenji Hirai and Hiroshi Uji‐i from Hokkaido University, Japan, tuned a cavity to the carbonyl stretching motion of ketones and aldehydes, slowing down the rate of a Prins cyclisation by up to 70%.4

‘How far could we push these changes?’ wonders computational materials scientist Prineha Narang from Harvard University, US. ‘Could we have something that is completely selective to one product and shuts off all the other products, in particular for reactions that are of technological relevance?’ Carbon dioxide reduction would be one of those reactions, she adds.

While polaritonic chemistry might not become the next big thing for industrial synthesis, flow setups that funnel reagents through a cavity could provide a solution to scaling up reactions. ‘I think it would be very nice to see controlling chemistry of triplet states,’ suggest Herrera. ‘There are many photosensitisers that are used in industry that rely on electrons becoming unpaired.’

‘The dream would be to have super selective chemical protocols using cavities,’ says Joel Yuen-Zhou who works on polariton chemistry at the University of California San Diego, US. ‘This is still under development, but it might be the case that with appropriate photonic architectures, this will be possible.’

However, so far, researchers haven’t been able to show that vacuum-field catalysis can do reactions that are impossible or hard to do with other types of chemistry. ‘This is what we would love to demonstrate,’ says Ebbesen. ‘But for the moment, we’re trying to understand the underlying mechanism of why some reactions are enhanced and some reactions are slowed down.’

What is actually going on?

For the most part, scientists still don’t understand the microscopic mechanism underlying vacuum-field catalysis. When molecules sit inside a cavity, only a small fraction – less than 1% – are actually occupying polaritonic states. The rest are in dark states, which can be likened to non-bonding orbitals. How exactly macroscopic changes happen with most molecules remaining ‘dark’ is still a mystery.

‘Sometimes the evidence is confusing or contradictory,’ says Herrera. ‘The mechanism that colleagues conclude in one paper doesn’t work for a very similar molecule in another paper.’ Initially, researchers tried to reason that polaritons’ unpredictable behaviour was due to energetic variations like changes in reaction barrier.

However, first theoretical5 and then experimental6 evidence – like the fact that like polar bonds are more strongly influenced than non-polar ones – now point to vibrational symmetry as the key to solving the dark state paradox. Vibrational modes can be naturally self-excited or de-excited by the vacuum field depending on their dipolar symmetry, explains Herrera – though how this links to reaction rate changes remains unclear.

A model that reproduces – let alone predicts – how different compounds behave is still missing. What scientists are after is a set of rules not unlike the Woodward–Hoffman rules: something simple that nevertheless reflects the complexity of the underlying quantum mechanics.

Most reactions studied so far are slowed down by cavities rather than accelerated – not something chemists usually look for in a catalyst. But why this happens and how they can be speeded up remain open questions, says Xiong. ‘Only if we can understand what knobs we need to turn, we can control the selectivity,’ he adds.

Still, the prospect of doing reactions by simply putting reagents between two mirrors remains intriguing. ‘Whether this is going to be a universal tool or not – I think, as of now, I would say no but I wouldn’t discard it in the future,’ says Yuen-Zhou. ‘Just like with photoredox catalysis, you just need to find the right class of reactions.’

There might certainly be something said for more people becoming involved and working together within this field. ‘People who learn quantum electrodynamics don’t often sit in advanced organic chemistry classes and vice versa – there’s a gap to be bridged,’ Narang says. ‘But of course that’s also where a lot of exciting discoveries come from.’