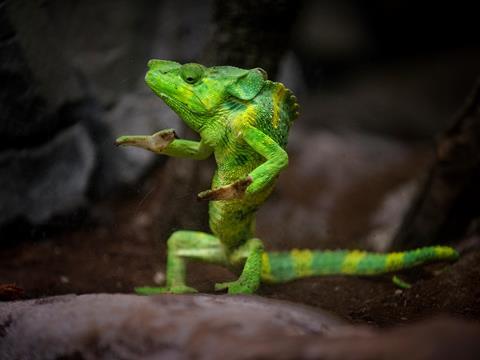 A class of nitrogen-stabilised boron compounds can switch between their established electrophilic and unprecedented nucleophilic behaviour, researchers have revealed. Tapping into this unusual reactivity, the Canadian team behind the study discovered several boryl shift reactions that are analogues of well-known carbon transformations like the pinacol rearrangement.

Ten years ago, chemists developed N-methyliminodiacetic acid (Mida) boronates as an alternative to other boron reagents, many of which are unstable and can’t be stored long-term. A trivalent ligand forms a cage around the boron, protecting it from reacting when it shouldn’t. When required, the boron is activated by decoordinating the Mida nitrogen with a mild base. This makes them valuable reagents in cross-coupling reactions – so valuable indeed that there are now more than 130 commercial Mida boronates.

A team led by University of Toronto’s Andrei Yudin and Travis Dudding, from Brock University, has now discovered that some Mida boronates can not only react as electrophiles but switch to nucleophilic behaviour. The researchers managed to selectively trigger one or the other behaviour in boryl shift reactions, including five unprecedented nucleophilic rearrangements. 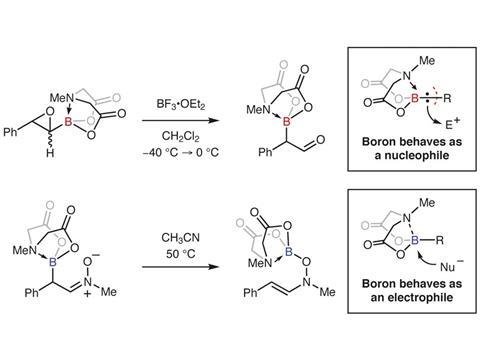 When the labile bond between the Mida ligand’s nitrogen and the boron is broken, it reacts like other boron compounds – as an electrophile. In this state, Mida boronates undergo 1,4-shift reactions like Peterson olefinations and Cope eliminations.

But when the Mida nitrogen is made to stick in place, it switches on boron’s nucleophilic side. In the presence of acids, the Mida boryl group travels with an electron pair, mimicking a 1,2-migrating hydride or carbanion fragment. Borylated diols undergo pinacol-type rearrangements, acyl-substituted Mida boronates participate in Bayer–Villinger oxidations and Beckmann rearrangements.

The researchers think that their nucleophilic shift reactions could offer an efficient route to make boron compounds whose synthesis often relies on installing other functional groups and then swapping them for boron at a later stage.