A substitution reaction known for destroying stereochemistry has been converted into a chirality-creating reaction to tackle one of the toughest organic chemistry challenges: making quaternary carbon centres. 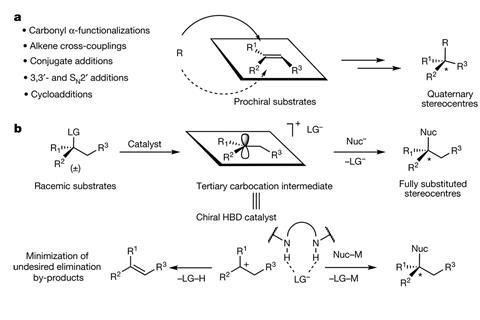 There is currently no perfect way to make quaternary stereocentres. Most methods rely on using a pro-chiral substrate – a compound like a tri-substituted alkene with well-defined stereochemistry. But making these pro-chiral substrates is a challenge in itself.

Eric Jacobsen from Harvard University, US, came up with an unusual idea: he wanted to control stereochemistry during the SN1 reaction, a nucleophilic substitution every student knows from their introductory organic chemistry course. It creates a flat carbocation intermediate that Jacobsen thought could act as the pro-chiral substrates.

However, the SN1 reaction is also known for destroying stereochemistry. Since a nucleophile can approach the carbocation from either side, traditional SN1 reactions produce racemates, even if the starting material is a single enantiomer. ‘I would talk about the SN1 mechanism to my students and I’d say “Wouldn’t it be interesting if you could actually control the delivery of the nucleophile back into this carbocation intermediate?”’ Jacobsen recalls. ‘Then, instead of losing the stereochemistry, you could create it.’

Jacobsen and his team have now designed a catalytic SN1 reaction that converts a racemic mixture into a chiral quaternary centre. Starting off with a racemic mixture of propargyl acetate, the chiral catalyst removes the acetoxy group and exchanges it for an allyl group, creating a single enantiomer. 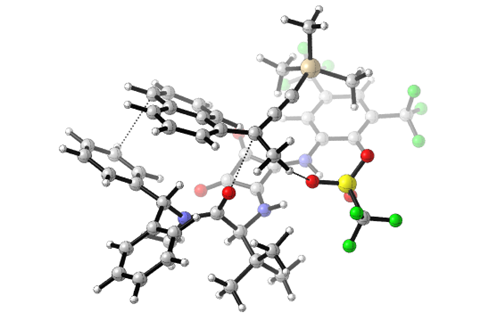 Computational image of the catalyst (bottom) holding the carbocation intermediate (top) in the chirality-inducing step. Non-covalent bonds such as charge interactions and aromatic stacking allow the nucleophile to only attach to one side of the carbocation

The catalyst is a chiral hydrogen-bond donor. It pulls the leaving group off the substrate and forms an ion pair with the carbocation intermediate that allows the nucleophile to only approach from one side. ‘Engineering attractive, non-covalent interactions is the key to controlling the stereochemistry,’ explains Jacobsen.

‘I think this is a really beautiful paper,’ says organic chemist Mary Watson from the University of Delaware, US. ‘It’s remarkable that the catalyst not only gives enantiomeric excess but also seems to protect the cation from decomposition to elimination,’ Watson adds. Eliminations – in which the carbocation loses a proton and forms an alkene – are common SN1 side-reactions that are often hard to prevent. But Jacobsen’s catalyst binds the leaving group so tightly that it can’t participate in elimination reactions.

Although Watson notes that the reaction’s scope is currently limited – simple phenyls aren’t as good at stabilising the carbocation’s charge and give lower enantiomeric excess than naphthyl substrates – it’s still a ‘huge step in the field’. ‘[Jacobsen] has opened a new frontier for asymmetric catalysis,’ agrees University of Illinois, US, catalysis researcher Christina White.

‘Our next step is to extend the scope to less stabilised compounds, but that is going to require an even more reactive catalyst,’ says Jacobsen. ‘We’d also love to do this reaction with other nucleophiles – oxygen and nitrogen.’