Confining a catalyst to the pores of a metal–organic framework (MOF) inverses its reactivity from nucleophilic to electrophilic, researchers have discovered.

MOFs have already found applications in gas storage, carbon capture and antimicrobial-releasing coatings. However, ‘At the moment the appeal of MOFs to organic chemists is lacking,’ says Marco Ranocchiari from the Paul Scherrer Institute in Switzerland. His team explores how porous materials can increase selectivity in organic reactions by trapping unstable intermediates.

Ranocchiari’s team added a zinc-amino MOF to the Morita–Baylis–Hillman reaction, which combines aldehydes with unsaturated ketones catalysed by a nucleophilic phosphine. ‘We discovered that we had a completely different reaction product,’ recalls Ranocchiari. The product turned out to result from an aldol-Tishchenko reaction, in which an electrophilic catalyst combines several aldehyde molecules. 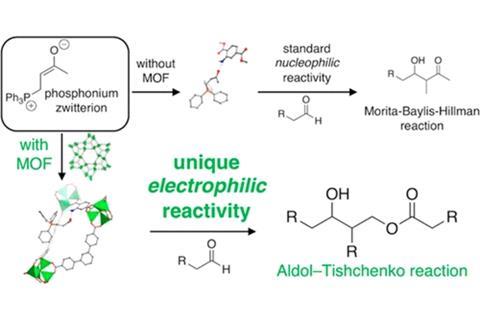 It became clear that the MOF turns the nucleophilic Morita–Baylis–Hillman intermediate into an electrophile. The intermediate, a molecule that carries both a negative and a positive charge, usually reacts with its negative, nucleophilic site. But when trapped within the narrow MOF pores, its geometry changes so that its electrophilic site is exposed.

‘It’s a nice contribution to MOF catalysis,’ comments Amarajothi Dhakshinamoorthy from Madurai Kamaraj University in India, who is developing MOF-based catalysts. ‘To my knowledge, no one has reported this type of reaction before. Usually, one cannot easily tune a catalyst’s reactivity – from nucleophile to electrophile – in homogeneous catalysis.’

Although the MOF-switched catalyst does not necessarily make synthesising aldol-Tishchenko products easier, Ranocchiari says their study proves that ‘MOFs can completely reverse an organocatalytic pathway,’. This, he adds, could allow them to design more selective catalysts, for example for enantioselective aldol-Tishchenko reactions, which usually rely on metal oxide catalysts.

‘We believe that MOFs can become tools for organic chemists,’ says Ranocchiari. Dhakshinamoorthy agrees, saying ‘MOFs can be used to achieve better selectivity in organic synthesis’. He adds, however, that MOFs are often unstable under organic chemistry reaction conditions. ‘So people now need to think about new, better MOFs to synthesise.’