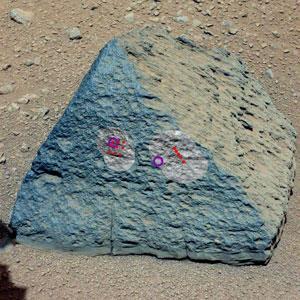 The rock 'Jake Matijevic'. The red dots show where ChemCam sampled it and the purple where x-ray spectrometry was used

Space scientists are celebrating the arrival of the first set of data from the Mars Curiosity Rover’s alpha-particle x-ray spectrometer – APXS – which has analysed the chemical composition of a small triangular wedge of rock on the surface of the planet.

The rock, which has been given the name ‘Jake Matijevic’ in honour of a late scientist on the mission, was shown to contain a higher concentration of alkali elements than had been seen on previous missions, suggesting that the mantle and crust of Mars has more variety than had previously been supposed.  The composition is similar to rocks found on Earth that have crystallised from water-rich magmas in the mantle, below the crust.

However, the main cause of the rejoicing among the mission scientists was the fact that the instrument was deployed successfully and that the hardware and software are functioning as hoped.

APXS has been designed to complement a second remote-sensing instrument on Rover, ChemCam, a chemistry and camera suite, which uses an infrared laser to vaporise the target surface, analysing the resulting emissions. So far, ChemCam has probed around 30 rock samples on Mars. APXS works by bombarding the target with alpha particles and x-rays, and analysing the energy that bounces back. ‘The two instruments complement each other very nicely,’ says ChemCam principal investigator Roger Wiens. ‘ChemCam can shoot at and analyse very small features, for example, only a millimeter in size, while APXS, with a 1.7cm diameter field of view, gives a better average rock composition. Additionally, each instrument is better at analysing some elements: APXS does a good job analysing trace elements nickel and chromium and is good at sulfur and chlorine, all of which are challenging with ChemCam, while ChemCam can analyse hydrogen, carbon, lithium, rubidium, strontium and barium.’

When the data came through, Wiens says: ‘The APXS team was really proud of their first measurements and the engineers operating the arm were ecstatic that everything behaved so well. Events like these are greeted with lots of applause and cameras when the first data is announced.’

Commenting on the new data from Curiosity, Joe Michalski, a planetary geologist at the Natural History Museum in the UK, says: ‘It is fantastic that the machinery is working well, and that multiple instruments are leading to the same conclusions showing that the calibration is right.’ However, says Michalski, caution should be exercised before too many conclusions are drawn from the analysis of a single sample. ‘It is very nice result, but just the tip of the iceberg. It is a good benchmark to show that we can start to use this instrumentation to obtain high quality data.’

Meanwhile, Mars experts received another slice of good cheer after a Martian meteorite was seen coming to Earth over Morocco, from where it was recovered and is now being analysed.1 ‘This is very exciting,’ says Michalski. Because the 7kg meteorite was picked up almost immediately after it landed, its geology is truly Martian and has not been contaminated by its presence on Earth, which is the case for most meteorites that are found.