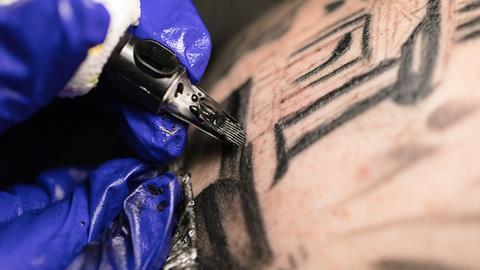 An analysis of tattoo and permanent makeup inks has found aromatic hydrocarbons, amines and heavy metals – all potentially hazardous compounds the EU wants controlled more tightly. The report, commissioned by the European Chemicals Agency (Echa), proposes concentration limits on ingredients such as azo pigments, which might release carcinogenic aromatic amines once in the body.

12% of Europeans – over 60 million people, most of them under the age of 35 – and 24% of US citizens have tattoos or permanent makeup. Apart from the general law requiring manufacturers not provide unsafe products, there aren’t any EU-wide regulations on what components can go into these inks. In 2016, the European commission asked Echa to investigate ink components and their safety.

Tattoo inks’ main components are a colourant and water, but they may contain surfactants, polymeric binding agents, fillers like silica or barium sulfate, and alcohol preservatives. A 2017 Joint Research Council report identified 67 azo compounds in tattoo inks, around half of which can produce carcinogenic aromatic amines as they break down in the skin under UV radiation.

The new report collates data from almost 5000 ink samples analysed and the more than 100 colourants found within. Over 80% of the surveyed colourants are organic dyes with azo pigments being the most common type. Although none of the colourants are carcinogenic or toxic, most of them are produced as technical products for different purposes and banned for use in cosmetics. This also means that the dyes’ purity standard is low, and they may contain harmful metals and organic byproducts.

Around 20% of dyes had previously been included in a ‘negative list’, which classifies harmful substances best avoided. While the report notes that there is little data on the fate of ink chemicals in the body, it finds infections and allergies from tattoo inks have become more common. Placing limits on how much of these substances can be present in tattoo inks is the most appropriate measure to control risks, the report concludes.