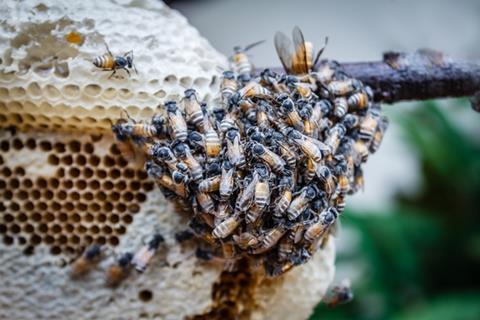 Researchers have found evidence that humans have been exploiting honeybees for almost 9000 years by examining the ‘chemical fingerprint’ left by beeswax on pottery artefacts from the Neolithic period.

The findings are part of a large project involving more than 60 researchers and archaeologists, who surveyed thousands of pottery fragments from Neolithic sites across Europe and north Africa. Wall art by the ancient Egyptians and Stone Age civilisations suggests the relationship between humans and honeybees goes back thousands of years, but when and where they were first domesticated is unknown. The team were able to track the use of bee products by Neolithic farmers by searching for traces of beeswax – which is relatively stable over time and retains a characteristic chemical profile – in organic residues found on ancient pottery fragments.

They found widespread evidence for the use of bee products among Neolithic farmers, and traces of beeswax were found on some of the oldest pottery vessels in Europe, from 8500-year-old sites such as Çatalhöyük in Turkey. The findings show that bees were certainly being exploited during this period, and hint that they may have been domesticated around the same time as other animals and plants.