Chemicals formed on meteorites may have started life on Earth 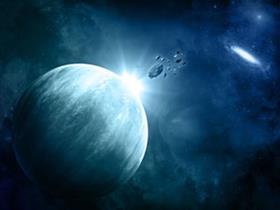 Could meteorites have brought the precursor molecules of life to Earth?

The molecules that kick-started life on primordial Earth could have been made in space and delivered by meteorites, according to researchers in Italy. The group synthesised sugars, amino acids and nucleobases with nothing more than formamide, meteorite material and the power of a simulated solar wind, replicating a process they believe cooked up a prebiotic soup long before life existed on Earth.

Formamide is a simple organic compound first suggested as a starting material for the formation of prebiotic biomolecules back in 2001.1 The chemical has been detected in galactic centres and stellar nurseries, as well as comets and satellites. These latest experiments show that formamide, irradiated by the solar wind – simulated here by a proton beam – and in the presence of powdered meteorites, gave rise to amino acids, carboxylic acids, sugars and nucleosides – the building blocks of DNA and RNA.2

‘Meteorites catalysed these transformations and the best catalyst was the chondrites, the oldest meteorites in space,’ says author Raffaele Saladino at the Tuscia University in Italy. ‘They would be very efficient catalysts during the flight in space and even as they fall down to the surface of the Earth or a similar planet.’

The authors suggest that bombardment of formamide with highly energetic protons could produce radical species that could react to yield complex and biologically relevant organic compounds. They give the example of the synthesis of purine nucleobases by multi-step addition of cyanide radicals to formamide, as previously predicted by another team.3 Saladino’s team has detected key intermediates in this purine nucleobase synthesis pathway in its samples.

Previous research hypothesised such reactions occurring on Earth, powered by meteorite bombardment, but this work raises the prospect of reactions in space facilitating life on Earth or other planets. This scenario suggests that if life formed on other planets it might share similarities with that on Earth.

Lucy Ziurys, an astrochemist at the University of Arizona, US, previously estimated that in interstellar space 10–10 molecules of formamide exist for every hydrogen molecule, making it fairly abundant by astronomical standards.4 ‘We did some back-of-an-envelop calculations and millimolar quantities could be delivered to a planet surface on carbonaceous chondrites,’ she says. With greater frequency of bombardment, as hypothesised for Earth around 3.5 billion years ago, amounts would go up.

‘There is also thought amongst the astrobiology community that the Earth lost all its early carbon in the form of an atmosphere which escaped – a methane or carbon dioxide atmosphere – so that all the carbon we find on Earth today was brought back by bombardment, so exogenous delivery, and there is a hell of a lot of carbon on Earth,’ she adds. ‘We know from studies of carbonaceous chondrites that it came back in many different forms and why not formamide?’

Saladino says he now plans to investigate if small molecules of RNA can be created via the same route by adding a phosphate mineral to provide the material to form the nucleic acid’s backbone.