An analysis of sugar-related compounds on meteorites has revealed an excess of d enantiomers that may help to explain why life makes use of only right handed sugars. The results suggest homochirality may have been down to the pre-life building blocks that were delivered to Earth from space billions of years ago. 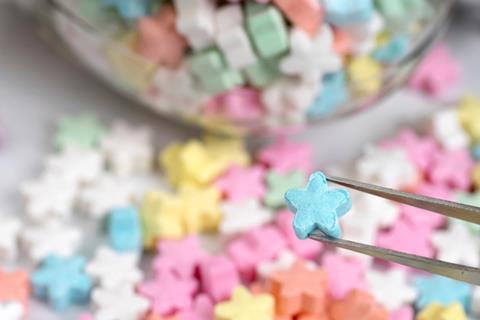 George Cooper and Andro Rios from Nasa’s Ames Research Center in California analysed samples from 4.5 billion-year-old carbonaceous meteorites, which show some of the earliest chemistry in the solar system. When they isolated various sugar acids and sugar alcohols they found large excesses of the right handed, or d, enantiomers of most of these compounds, compared with the l mirror image form. ‘Any excess is unusual because most non-biological laboratory syntheses produce equal amounts of any mirror-image pair,’ explains Cooper.

Biological molecules, however, tend to contain only right handed sugars – for example d-glucose and d-ribose – and left handed amino acids. The origin of this asymmetry is a mystery, but these results support the idea that it comes from space.

The kinds of molecules Cooper and Rios identified are thought to be precursors to some of the earliest forms of life. They reason that if molecules delivered to the early Earth were one particular handedness, any primitive life forms that eventually developed would favour the prevalent form. The results also fit with previous studies showing some meteorites contain excesses of the left handed version of some amino acids.

The reason why the d sugar derivatives outnumber the l to such an extent on the meteorites is still unknown. Cooper suggests it could be due to the influence of circularly polarised light – electromagnetic waves where the direction of the electric field rotates either clockwise or anticlockwise – during their synthesis.

The next steps, he says, will be to try and verify the findings with more samples, and to compare them to analyses of organic compounds from future space missions such as the OSIRIS-REx mission to asteroid 101955 Bennu, which is due to launch in September. ‘Although [we] used several meteorites and different criteria to determine if the results were real, we are still bound by using samples that have reached Earth. Analysing fresh samples away from Earth will be an additional verification,’ he says.

Cornelia Meinert, part of a team at France’s National Centre for Scientific Research that showed ribose could be generated in experiments mimicking the icy conditions found on comets, agrees that the results – while exciting – still need to be verified and explored further. She says her group will try and reproduce the excesses of d enantiomers in a lab setting.

‘We saw exactly the same set of sugar acids and sugar alcohols in our simulation experiments,’ she says. ‘Since we used a non-chiral energy source – UV light – to trigger the reactions, everything was racemic. In the next step we will perform the same experiments with circular polarised light.’