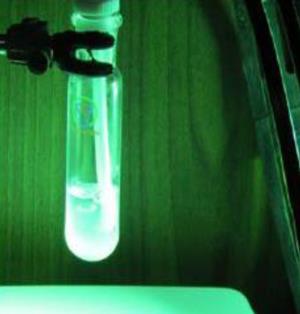 Mimicking the breakdown of atmospheric organic compounds has led to a cleaner way to make a key nylon raw material.

Industrial adipic acid production first oxidises cyclohexane to cyclohexanol and cyclohexanone at high temperatures and pressures. This step’s yield can be less than 10%, a significant limitation. Secondly, nitric acid oxidation opens up these ring structures, completely converting them into straight-chain adipic acid.

Nitrous oxide released from this process accounts for 5–8% of all annual human-related emissions of the gas. As well as being the dominant human-emitted ozone depleter, nitrous oxide is the third most important greenhouse gas. Cleaning up adipic acid production could therefore have clear environmental benefits – but so far all efforts have been too costly.

Hwang and Sagadevan came upon their route by chance, in exploring how ozone and UV light oxidise and break down organic compounds in the atmosphere. ‘It occurred to me to oxidise cyclohexane, which contains only unactivated C–H bonds, this way,’ Hwang says. ‘In organic chemistry C–H bond functionalisation of hydrocarbons is extremely difficult, and considered a Holy Grail.’

The physical chemists bubbled ozone through neat cyclohexane while shining UV light on it at room temperature and pressure. After a few hours, adipic acid precipitated. They optimised the cyclohexane to adipic acid conversion yield to 75% by getting a brighter lamp, letting the reaction run longer and adding weak acid. The method also worked well on a variety of other ring structures.

Yale University’s Nilay Hazari calls the C–H bond oxidation method ‘elegant’, and asserts that it could result in improved industrial adipic acid synthesis methods. While Hwang is yet to work out a cost comparison for the new route, he notes ozone can be made cheaply from oxygen in the air. His next step will be increasing the scale from 6.5ml currently, including bringing in chemical engineers to design and optimise larger scale reactors. Though Hwang says ‘many things have to be overcome and optimised’ he is ‘optimistic’ about the prospects.