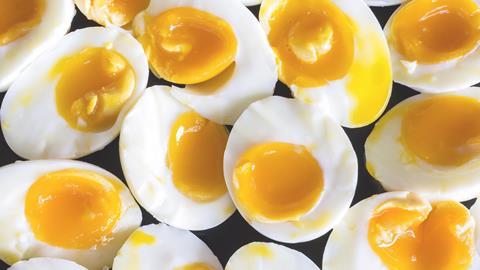 Australian scientists have been awarded the Ig Nobel prize in chemistry for creating a device that can un-boil an egg.

The team, led by Colin Raston from Flinders University, developed the Vortex Fluid Device (VFD) to change the structure of proteins by spinning them at high speed. Earlier this year they demonstrated the technique using hard-boiled egg whites, showing that the shear stress from spinning could cause the denatured proteins to re-fold, reverting the egg white to its raw, transparent state.

On receiving the Ig Nobel Raston said: ‘It’s living the dream. All scientists want to do something that is significant, but this has the wow factor.’ But he was keen to point out that the technology’s main applications lie in biomedical research, not in the kitchen. The VFD could be used to fix misfolded proteins that are produced by recombinant bacteria, for example, and has already been shown to improve the potency of a common cancer drug fourfold.

The Ig Nobel prizes were set up to recognise ‘achievements that make people laugh, then think’. They are awarded each year shortly before the Nobel prizes to some of the most imaginative, and often silly-sounding, research across the sciences.