Robert ‘Bob’ Curl, a physical chemist who was jointly awarded a Nobel prize in 1996, has died aged 88. 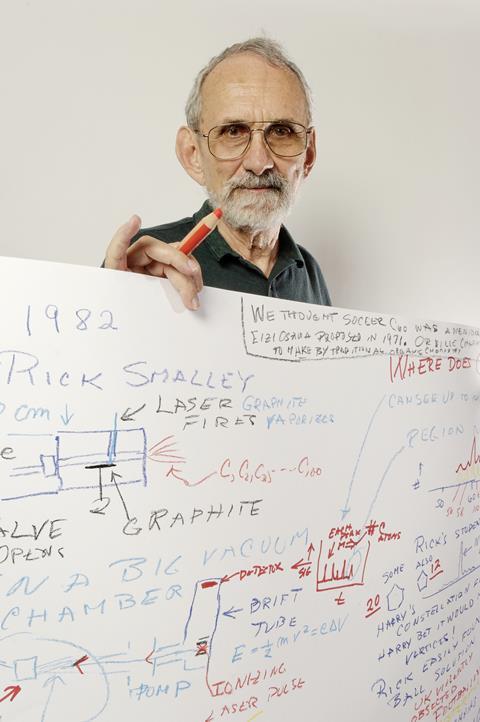 Curl holding a sheet of notes showing how fullerenes were discovered

Curl was a member of the team that discovered fullerenes in 1985. Curl, working alongside Harry Kroto, Richard Smalley and graduate students James Heath, Yuan Liu and Sean O’Brien, became the first to synthesise and identify the famous buckyball molecules after irradiating a graphite surface with lasers. This experiment, which aimed to recreate conditions in dying stars, created a carbon gas that then formed C60 and C70 molecules as it condensed. Curl, Kroto and Smalley shared the chemistry Nobel prize for their work on the project, which helped to lay the foundation for the rapid growth of nanomaterials research.

Curl was born in Texas, US, in 1933. His interest in science was first sparked when he received a chemistry set for Christmas at the age of nine. He would go on to study chemistry at the Rice Institute (now Rice University) in Houston, receiving his bachelor’s degree in 1954, before completing his PhD at the University of California, Berkeley in 1957.

In an autobiography written for the Nobel Prize Foundation, Curl described his years at Berkeley as ‘some of the happiest’ of his life, as it was there that he met and married his wife Jonel, with whom he would have two children.

After a brief period working as a postdoc at Harvard University, Curl returned to Rice in 1958, where he would continue his research programme, which focused mainly on spectroscopy, for more than 50 years until his retirement in 2012.

Throughout his career Curl earned a reputation for humility and being a passionate mentor to those around him. During his retirement he would still attend departmental seminars and help students, and has been described as a ‘constant presence’ in Rice’s chemistry department up to the most recent semester.

‘Despite winning one of science’s top honors, Bob was a quiet hero who stayed true to his passions – scientific discovery, teaching and the spirit of collegiality,’ said Rice’s president Reginald DesRoches in a statement on the university’s website. ‘During his 64 years as a faculty member at Rice, Bob mentored countless students and colleagues. His institutional presence on campus made a profound contribution to the university’s culture and character that will live on for years to come.’