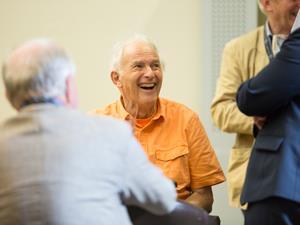 Nobel prize-winning chemist and past president of the Royal Society of Chemistry Harry Kroto died on Saturday 30 April aged 76.

Kroto was awarded the 1996 chemistry Nobel prize, along with Robert Curl and Richard Smalley, for the discovery of fullerenes, and was knighted the same year.

Born in Wisbech, Cambridgeshire, to parents who left Germany as refugees during the second world war, Kroto spent most of his childhood in Bolton in northern England, where his parents set up a balloon manufacturing and printing company in 1940. He went to Bolton School, where he developed a fascination with chemistry, physics and maths, and went on to study chemistry at the University of Sheffield in 1958, where he completed a BSc in chemistry, and then a PhD in molecular spectroscopy.

Upon completing his PhD in 1964 he moved to Canada and took up a postdoc position at the National Research Council (NRC) in Ottawa to undertake spectroscopy research. Then, in 1966, he went to Bell Labs to study liquid phase reactions using Raman spectroscopy, but soon moved back to the UK to take up a postdoc position, and later a permanent lectureship at the University of Sussex.

For several years at Sussex he continued to carry out spectroscopic studies into new chemical species. Around this time he also worked with astronomers in Canada to characterise long, linear carbon chain molecules (such as HC3N and HC5N) detected in outer space. This work eventually led to the discovery that would win him the Nobel prize. In the 1980s, Kroto was working with Curl and Smalley at Rice University, US, on experiments that simulated conditions in the atmospheres of stars. It was these experiments that led to them discovering a new allotrope of football-shaped carbon – C60 – that could form from a condensing carbon vapour. It was Kroto’s idea to christen the new allotrope Buckminsterfullerene in homage to the US architect Buckminster Fuller, whose geodesic domes had helped him visualise the structure of C60.

In the wake of his Nobel success, Kroto became a prolific speaker and science communicator, devoting much of his time to educational outreach and public engagement activities. In 1995 he set up the Vega Science Trust to create science films that were broadcast on BBC television.

He was president of the Royal Society of Chemistry from 2002–2004, after which he became a professor of chemistry at Florida State University in the US.

Robert Parker, now chief executive of the Royal Society of Chemistry, worked in the publishing wing of the organisation when Kroto was president. ‘I’ve always been struck by Harry’s genuine passion for chemistry, which he shared so generously with young people and early-career researchers especially. He had an easy-going style which made him so approachable and such a good communicator and ambassador for chemistry,’ he says. ‘While he was clearly a brilliant scientist, it wasn’t his only passion and his abiding interest in art and design filtered through to influence in innovative journal covers and finding new ways to approach big problems. His warm-hearted nature, authentic interest in people and deeply-held personal opinions will be missed.’

Michael Farthing, vice-chancellor of the University of Sussex said: ‘Harry Kroto’s intelligence was stratospheric – and his contribution to chemistry will live on forever… He was responsible for changing the way modern scientists think about chemistry and he mirrored this with an active role in global politics and the arts.  His love of so many academic and cultural disciplines meant that he was able to view the world and its possibilities in such a unique and positive way.’

He is survived by wife Margaret, and two sons Stephen and David.