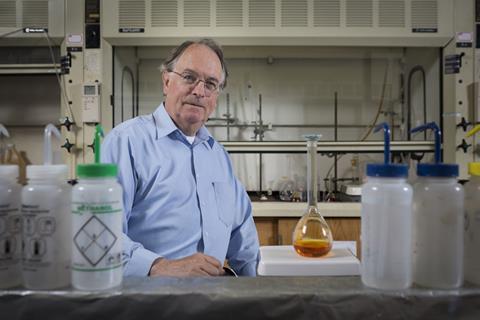 The 2019 Nobel prize in chemistry has gone to the three scientists behind a discovery without which neither mobile phones nor electric vehicles might ever have become reality: lithium-ion batteries.

The three battery pioneers sharing the prize equally are John Goodenough from the University of Texas at Austin, US, Stanley Whittingham from Binghamton University, US, and Akira Yoshino from Japan’s Meijo University. At 97 years old, Goodenough is the oldest chemistry Nobel laureate and the oldest person ever awarded any Nobel prize, beating last year’s physics laureate Arthur Ashkin by a few months.

‘Rechargeable lithium-ion batteries are the hidden workhorses of the mobile era which came about thanks to fundamental research that began over 40 years ago,’ said materials scientist Paul Coxon from the University of Cambridge, UK. ‘It’s a wonderful example of taking research from the lab; we can literally hold the result in our hands.’

The prize has been a long time coming, with polls favouring lithium-ion batteries for several years. In 2015, Web of Science’s citation analysis also featured Goodenough and Whittingham as possible winners.

On social media, chemists voiced their delight with the Nobel committee ‘finally’ taking the decision to reward this world-changing discovery. ‘In my view, this award is long overdue and it’s great to see that this important area of materials chemistry has been recognised,’ said energy materials researcher Saiful Islam from the University of Bath, UK.

But developing the first commercial lithium-ion batteries, which entered the market in the early 1990s, took several decades. 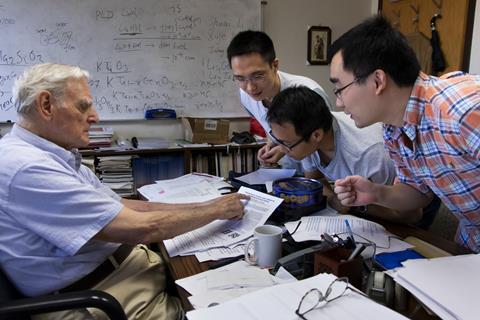 Source: © University of Texas at Austin

Whittingham started working on energy storage in the 1970s, at a time when much of the world faced an oil shortage. The only rechargeable batteries available then were lead–acid and nickel–cadmium types. Both are heavy and contain toxic metals. Nickel–cadmium batteries also suffer from a memory effect, where they lose capacity when they’re recharged frequently after only being partially discharged.

Whittingham started his quest to improve energy storage by searching for a cathode material to pair with lithium. The lightest metal on the periodic table, lithium, is prone to discharging its electrons, which made scientists eager to employ it in batteries. Whittingham and his team found that titanium disulfide has just the right structure to house the lithium ions coming from the anode and just as importantly can release them again. In 1976, Whittingham demonstrated the first rechargeable 2.5V lithium-ion battery.

However, the lithium metal anode was prone to dendrite formation. These spikes growing out of the electrode could short-circuit the battery, creating hard-to-extinguish fires. The lithium metal battery never took off.

At the same time, Goodenough was working on a different cathode material to make even more powerful batteries. In 1980, his team found that a cobalt dioxide cathode could double a lithium metal battery’s output to 5V.

‘I remember well when John, then in Oxford, did his pioneering work on the lithium cobalt oxide cathode,’ said Richard Catlow from University College London, UK. ‘We were all impressed by this typically imaginative and creative piece of solid state chemistry; but none of us realised that the discovery would have global impact by changing the way we live and work.’ 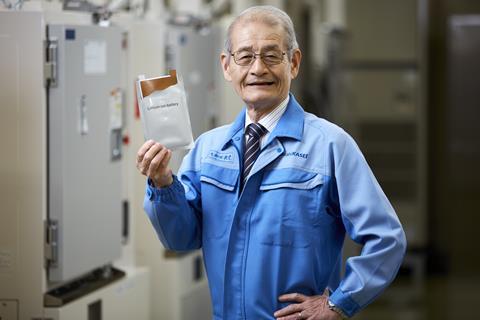 In 1985, Yoshino’s group made the final important step towards commercial batteries. His team found a graphite-like material that could house lithium ions and replace the fire-prone lithium metal anode. An electrolyte containing lithium perchlorate in propylene carbonate rounded off the device, as it could withstand damage without exploding.

Six years later, the first commercial lithium-ion batteries came on the market. Their 4V design was pretty much unchanged from Yoshino’s initial design, apart from the electrolyte, which now contained lithium hexafluorophosphate.

‘The research I have been involved with for over 30 years has helped advance how we store and use energy at a foundational level, and it is my hope that this recognition will help to shine a much-needed light on the nation’s energy future,’ said Whittingham.

Battery technology continues to be an active research area as a way to power a fossil fuel free world. ‘It’s not the end of the journey, as lithium is a finite resource and many scientists around the world are building on the foundations laid by these three brilliant chemists,’ said the Royal Society of Chemistry’s president Carol Robinson.