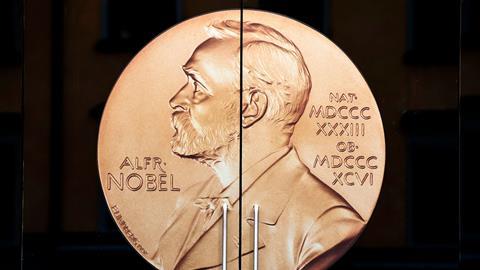 Has the chemistry Nobel prize really become the biology prize?

‘Not another chemistry Nobel going to biologists!’ How many times have you heard that complaint? But is there really anything in it?

It’s sometimes said that the number of chemistry prizes awarded to work rooted in the life sciences – at least nine of the prizes since 2000 – simply shows how broad chemistry is: at the molecular scale, biology is chemistry. But does that argument stack up? A historian of chemistry and a mathematical chemist argue in a new paper that, not only have the chemistry Nobels indeed become more biological in recent decades, but also the prizes of that nature tend to reward work outside of the chemical mainstream, being much more closely tied to research in the life sciences itself. In effect, they say, the chemistry Nobels are being shared out between genuinely different disciplines.

The two researchers, Jeffrey Seeman of the University of Richmond in the US and Guillermo Restrepo of the Max Planck Institute for Mathematics in the Sciences in Leipzig, Germany, say that the chemistry Nobel has now mutated ‘into what is effectively the Nobel prize in chemistry or life sciences’. They call for this to be openly acknowledged, rather than disguised with a pretense that ‘it’s all chemistry’. What’s at stake here is not just a matter of justice about who gets the most prestigious of all scientific awards, but the de facto boundaries of chemistry as a discipline. 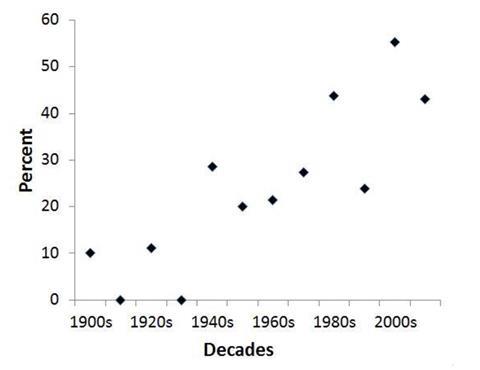 Seeman and Restrepo show that the proportion of chemistry Nobels awarded for achievements in the life sciences has grown fairly steadily from around one per decade in the early 20th century to four to five per decade since the 1980s.1 They quote geneticist Jan Lindsten and cell biologist Nils Ringertz, both of whom served on the the Nobel Committee for Physiology or Medicine in the 1980s, who wrote that many chemistry laureates ‘have made contributions which might equally well have been awarded a prize in physiology or medicine’.

Chemistry Nobel laureate Roald Hoffmann of Cornell University in the US, has previously viewed this trend ‘as a call to our profession to embrace the far and influential reach of chemistry’. But does it really reflect what chemistry is up to today?

No one can doubt that biochemistry has been a part of chemistry since its earliest days: Antoine Lavoisier studied respiration and fermentation, Justus von Liebig studied metabolism, and fermentation was central to the chemical understanding of enzyme catalysis. But might the disciplines have now gone their separate ways, with distinct communities, journals and spheres of influence? To answer that question, Seeman and Restrepo analysed the papers in two journals throughout 2007, chosen to be representative of mainstream chemistry and biochemistry: Angewandte Chemie International Edition and the American Chemical Society’s Biochemistry. They looked at the citations made in papers in the two journals to those in other journals, and vice versa, to get a picture of the web of ‘intellectual relationships’.

In other words, says Restrepo, ‘there is a core community of chemistry, that we detected using bibliometric methods, which is not that related to its sibling biochemistry’. The kinds of biologically oriented papers that garner chemistry Nobels aren’t really a part of the chemistry literature at all, he says – the two fields ‘belong to intellectual territories that are quite distant from each other’. This, he and Seeman say, is the ‘organic result’ of how scientific communities form and maintain themselves and presumably reflects an unspoken perception that the questions and goals of the communities are different.

The researchers used similar bibliometric analysis to look at the influence of chemistry Nobel laureates, and found that most awards are quite polarised, either being cited almost exclusively in the physical (typically chemical) or the life sciences.

Disciplinary divisions are built into the way the Nobel awards operate. They are awarded by the Nobel Foundation under the auspices of the Royal Swedish Academy of Sciences. The Academy elects members each year who are assigned to one of 10 categories, such as physics, chemistry and the biosciences, and selects the Nobel committees from these members. It stands to reason, then, Restrepo says, that ‘if the Academy elects more life scientists than chemists, and if the Nobel Committee for Chemistry becomes weighted more heavily in life scientists, then it is likely that more of the Nobel prizes in chemistry will be in the life sciences’. 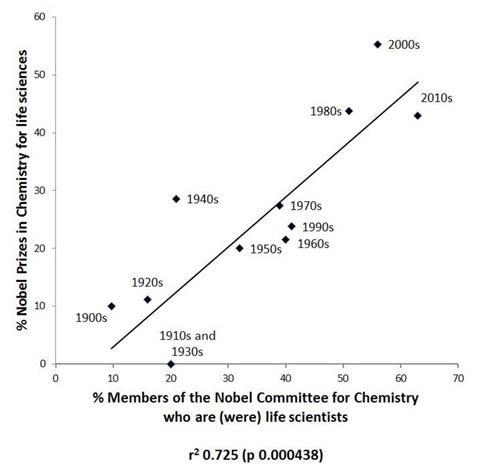 So what, if anything, is to be done? ‘We are not suggesting that chemists should fight their own corner, but that they, and awarding institutions, should be aware of the territory of chemistry, its shape and reaches,’ says Restrepo.

‘Is the current structure of the Nobel prizes optimal for the future?’ the pair asks. ‘The evidence is: certainly not. In a way, the Nobel Foundation and the Nobel’s prize-awarding bodies have produced a patchwork of change over the past several decades, a force-fit into the schema of Alfred Nobel. That strategy will not suffice forever.’

With this in mind, they suggest several possible changes to the ways the Nobel awards operate. For example, it could ‘include leading international representatives of the most active and most influential fields of chemistry in the Nobel Committee for Chemistry’. The limit of three recipients each year could be relaxed to broaden the pool of laureates and the Foundation could ‘publicly document the criteria and disciplinary boundaries for each of its prizes and for membership on the Nobel Committees’.

‘Perhaps one of the suggestions they could easily implement is the use of bibliometric tools to keep track of the evolution of the disciplines and also as a tool to assist the selection of members of the committee,’ says Restrepo.

Robert Lefkowitz of Duke University in Durham, North Carolina, who won the 2012 chemistry Nobel with Brian Kobilka for work on G-protein coupled receptors, doesn’t buy it. ‘I think it is an unproductive argument based on definitions,’ he says.

He points out that most standard definitions of chemistry include biochemistry as a branch. ‘Is there anything in Alfred Nobel’s will that says the different branches need to be equally rewarded?’ he asks. It simply says instead that the prize should go to those whose discoveries ‘have conferred the greatest benefit to humankind’. If the Nobel committee decides that the greatest benefit has come disproportionately from biochemistry, and Lefkowtiz agrees that this has been so in recent years, then so be it. But ‘I understand that these other chemists feel disenfranchised’, he says. ‘I would too.’

In any event, he says, the choice is up to the Swedes, whereas Seeman and Restrepo ‘seem to be saying that the prize is owned by all of us’.

And while a common complaint is that the life sciences already have their own prize, Lefkowitz points out that it is actually a prize for ‘physiology and medicine’ – but when was the last time a physiologist or physician actually won it for work in those fields? ‘Almost never,’ Lefkowitz says. ‘It more often goes to biochemists than does the chemistry prize.’ Similar arguments rage in other disciplines too: some say particle physics is inordinately represented in the physics prize, for instance, while in the early 20th century the turf wars were more between physics and chemistry as awards went to discoveries in radioactivity and atomic physics.

Seeman and Restrepo interacted extensively with members of the Nobel committee as they prepared their paper, in particular to clarify the procedures of the Nobel Foundation. They stress that the committee members were ‘extremely responsive, cooperative and helpful’. Protein chemist Gunnar von Heijne of Stockholm University, Sweden, current secretary of the chemistry Nobel committee, finds food for thought in the paper but doesn’t think that the findings demand any more changes or soul-searching than are already happening.

Von Heijne says that it is hard to implement changes to the Nobel Foundation’s procedures anyway. ‘It is the statutes of the Nobel Foundation and, ultimately, the will of Alfred Nobel, that provide the basic framework for the Nobel prizes, [including] the prize areas. This basic framework cannot – and probably should not – be easily changed.’ He adds that ‘the Nobel prizes rest on a finely tuned and slowly evolving system of rules and procedures, and major changes can easily create more problems than they solve’.

On the suggestion that the Nobel committee should include the most active and influential scientists in each field, for example, he says that ‘over the years that I’ve served on the Nobel Committee, I’ve become convinced that it is much easier for a rather close-knit group of scientists living in a far-off country to take the necessary detached view of the world of science that the responsibility of proposing Nobel prizes carries with it – and to put in the months of work required every year – than it would be for a committee of busy international high-flyers’.

And increasing the number of laureates for a given prize would simply widen the arguments about where the cutoff lies, he says. ‘In my own experience, the number of “deserving individuals” grows rapidly with the number of laureates included in a prize. There would be many more candidates of more or less equal merit to consider for a ‘fourth slot’ than for the first, second or third slot.’

While Restrepo says that one of the aims of the paper is ‘to bring into the open some of the opacity’ of the Nobel prize process, von Heijne feels that too explicit and formulaic a selection process could create a straitjacket. If, for example, some formal and publicly stated definition of what ‘counts’ as chemistry were to be drawn up, it would need to be constantly revised with every passing year – indeed, it ‘would be outdated even before it is decided’. Von Heijne says that his own preference ‘is to be inclusive and recognise the broad reach of chemistry in contemporary science and technology’. Lefkowitz thinks that the chemistry Nobel actually has had some of the most creative and original committees in recent decades, for example making awards for work in microscopy or materials science. ‘They surprise people year after year,’ he says.

So perhaps some fuzziness and secrecy is best after all. If the Nobel prizes were selected by algorithm, what would we have to argue about every October?