Singapore-based scientists have discovered a way to rapidly form methane hydrates at atmospheric pressure and moderate temperature by combining the additive 1,3-dioxolane with an amino acid. This mixture is significantly less toxic than traditional additives and results in the fastest reaction time ever reported to produce hydrates for stable methane storage. 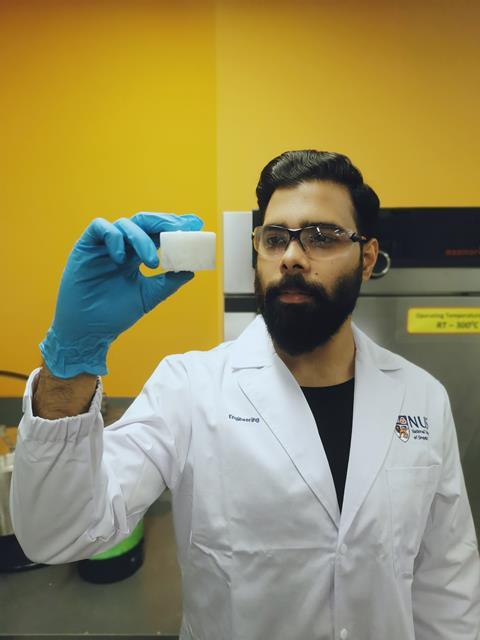 Gas hydrates are crystalline inclusion compounds where gas molecules are trapped inside host cages made up of water molecules. Nature has been storing methane as gas hydrates for millions of years and these structures represent a significant source of the cleanest-burning fossil fuel. ‘To the naked eye, methane hydrates present themselves simply as ice or snow,’ explains Praveen Linga from the National University of Singapore. Methane hydrate formation is a simple physical phase change process and gas hydrates melt the same way as ice, releasing the stored gas and water, earning it the name combustible ice.

Commercial applications of gas hydrates are limited by problems in forming the hydrates at a fast enough rate, and ensuring their prolonged storage stability. Now, Praveen and his co-workers have found that adding a small concentration of l-tryptophan, along with the thermodynamic and kinetic promoter 1,3-dioxolane, results in ultra-rapid hydrate formation.

l-tryptophan is a benign and hydrophobic amino acid, which functions here as a kinetic promoter. It increases the porosity and flexibility of the hydrate crystals and opens up pathways within the crystal microstructure. This facilitates greater methane–water contact and allows faster methane diffusion into the solid phase.

Adding l-tryptophan caused a 147% increase in the hydrate rate of formation compared to a water–1,3-dioxolane system. The team also discovered that the hydrate pellet exhibited incredible stability when stored at atmospheric pressure and a temperature of −5°C. Moreover, their additive mixture is also less toxic than traditional additives such as tetrahydrofuran, which is both volatile and carcinogenic.

Carolyn Koh, director of the Center for Hydrate Research at the Colorado School of Mines, US, calls the research an impressive advance. ‘The ability to rapidly form methane hydrates at lower pressure conditions and under mild refrigeration are necessary requirements, and when coupled with optimised and reduced promoter concentration, will be important for practical applications of gas hydrates.’

Jeong-Hoon Sa, a gas hydrate researcher at Dong-a University in South Korea, says the practical use of hydrates has been hindered by their insufficient formation rate and long-term stability. ‘It is remarkable that the produced hydrates can retain natural gas only at 268.15K under atmospheric pressure for eight days. The next pilot-scale testing will further advance industrial applicability of the solidified natural gas technology process.’

‘We firmly believe that this is the first solidified natural gas technology process developed that can genuinely boast feasibility for commercial adoption,’ says Praveen. He says the team now plan to enhance the volumetric gas storage capacity of the combustible ice by tuning the additive concentrations and designing new reactors.