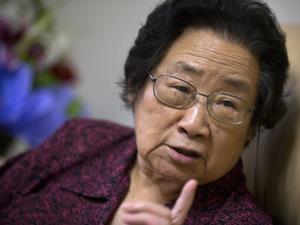 China has been celebrating its first and long-awaited Nobel prize in the sciences, but the controversy that surrounds the awarding of the prize to Tu Youyou also highlights powerful tensions within its research system.

Tu, a retired scientist at the China Academy of Traditional Chinese Medicine (CATCM), shared half the 2015 Nobel prize in physiology or medicine for her contribution to developing the antimalarial drug artemisinin. The other half of the prize went to William Campbell from Duke University and Satoshi Omura of Japan’s Kitasato University for their work on the antiparasitic drug avermectin.

First isolated from Artemisia annua or sweet wormwood over 40 years ago, artemisinin saves tens of thousands of lives every year. However, the story of its discovery has been debated for decades in China. The awarding of the medicine Nobel prize has only served to reopen old wounds.

Unlike other senior Chinese scientists, Tu has no PhD and never trained overseas. She is also not a member of the elite Chinese Academy of Sciences (CAS), which has led to some criticising the country’s scientific establishment for its lack of innovative research, despite surging research funding in recent years. ‘The selection system for CAS membership fails to identify original research with tremendous significance,’ says Lu Bai, a neuroscientist and vice dean of the school of medicine at Tsinghua University. ‘So many controversies surrounding what ought to be national pride, represent a concentrated outbreak of dissatisfaction with the current science and technology (S&T) system in China,’ says Li Xia, a professor of science history at Shanghai Jiaotong University.

The search for a new antimalarial drug started in 1967 after the then North Vietnamese leader H? Chí Minh asked China for help to treat thousands of Vietnamese and allied Chinese soldiers suffering from malaria during the Vietnam War. Despite the start of the Chinese Cultural Revolution, Project 523 launched on 23 May 1967 and brought together hundreds of doctors and chemists to work on the drug. Tu, now 85 years old, was one of them.

Funding was not a problem at the time, although apparatus was basic. Inspired by traditional Chinese medicine (TCM), many teams were attempting to extract the biologically active fraction of wormwood, but it was Tu who first adopted a low-temperature, diethyl ether-based method to extract artemisinin, rather than the standard alcohol-based technique. This proved crucial as it did not degrade the active ingredients.

Although Tu reported the discovery at a Project 523 meeting in March 1972, the lack of paper authorship at that time, the project’s secrecy and massive collaborative nature, and other teams’ independent work to extract artemisinin has made assigning credit for the discovery a source of continuing controversy in China. While this dispute has mostly been hidden from the public, the phenomenal success of artemisinin has highlighted the embarrassing fact that China has not isolated or synthesised any similarly important compounds since the 1980s. At that time, the country began to embrace the competition-based modern research system, and double digit annual growth in research funding has secured its status as the world’s second largest producer of S&T papers.

The appliance of science

But according to Liang Xinmiao, a leading pharmaceutical chemist at the CAS Dalian Institute of Chemical Physics, China’s lack of innovative drugs is not evidence of failure of the modern S&T system. The development of new drugs simply takes time. The higher standards for pharmaceutical research and development also increase the difficulty of identifying important compounds like artemisinin in spite of new extraction and purification technologies. There’s no doubt that artemisinin’s isolation required a hefty dose of luck, Liang tells Chemistry World.

Wu Yishan, vice president of the Chinese Academy of Science and Technology for Development, sees other complications. ‘It is not that research competition is a problem, but the paper-based evaluation,’ he says. Wu explains that unlike the target-oriented story of artemisinin’s development, Chinese scientists nowadays only focus on topics that will deliver publications. He also notes that much applied research, such as China’s national hi-tech R&D programme, has been focused on catching up with the west so is hardly likely to produce cutting edge innovations.

The key state S&T schemes, which have a budget of hundreds of billions of yuan and aim to overtake the west in fields ranging from genetic modification of crop seeds and infectious disease control to mobile technology and aeroplane manufacturing, seem willing to combine innovation and collective research strength. But according to Li, although collective research produced artemisinin, this does not mean it is superior to modern research competition. ‘Collective research needs bureaucratic administration, which often relies on established, or at least traceable, routes, but many contemporary science problems, such as the Ebola virus, have never been encountered before,’ Li says.

Although the idea of relying on collective strength for scientific breakthroughs is largely dismissed, artemisinin’s success still inspires Chinese scientists. At the Dalian Institute of Chemical Physics, Liang has been chairing a key project, the Bencao substance programme, since 2010. Deriving its name from Bencao Gangmu or Compendium of materia medica – a comprehensive collection of ancient TCM herbs and prescriptions completed over 400 years ago – the project aims to identify and isolate thousands of pharmaceutical compounds from these plants using high-throughput screening. The programme has isolated batches of promising compounds, although funding and labour constraints have impeded progress. ‘Many traditional Chinese pharmacopoeia recorded precious clinical experience, combined with modern technologies they are destined to produce promising results,’ Liang says.