The 2015 Nobel prize in physiology or medicine has been split between three researchers for unearthing two naturally-occurring antimicrobial products that can fight parasitic diseases such as malaria and river blindness.

William Campbell from Duke University, US, and Satoshi Omura at Kitasato University, Japan, are sharing half of the Nobel for their discovery of avermectin, a drug used to combat river blindness. The other half has been awarded to Youyou Tu at the China Academy of Traditional Chinese Medicine for her work on the antimalarial drug artemisinin.

Although both Campbell and Omura and Tu adopted different approaches to isolate these compounds, their achievements have had an equally profound impact on society, according to Hans Forssberg, member of the Karolinska Institute Nobel committee. ‘The discoveries of the 2015 Nobel laureates … represent a paradigm shift in medicine, which has not only provided revolutionary therapies for patients suffering from devastating parasitic diseases, but has promoted wellbeing and prosperity both for the individual and society,’ he said.

Working in collaboration with the Merck Institute, US, in 1978, Omura collected soil samples across Japan and successfully isolated the bacterium Streptomyces avermitilis. From Omura’s cultures, Campbell was able to purify the active compound in the sample, avermectin. This was developed further to produce the drug ivermectin – an effective treatment against parasitic infections such as onchocerciasis, also known as river blindness.

In contrast to Omura and Campbell’s work, Tu was inspired by traditional Chinese medicine in pursuing a treatment for malaria. After researching treatments in the ancient Chinese text A handbook of prescriptions for emergencies by Ge Hong, written in 284AD, Tu noticed that the herb, sweet wormwood, had been used to alleviate malaria symptoms. 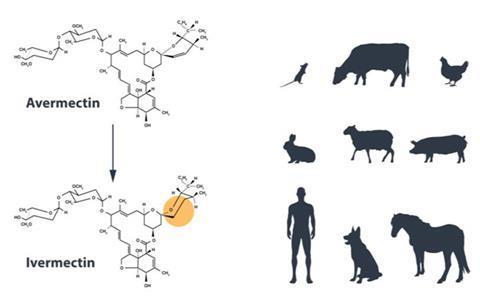 Inspired by the review, she successfully obtained an active compound, artemisinin, from the herbal remedy, but found it difficult to conduct clinical trials during the Cultural Revolution in China. After proving the extract was safe by testing it on herself, Tu developed artemisinin as a antimalarial drug. Since her discovery, it is estimated that the drug saves about 100,000 lives in Africa every year.

Tu’s recognition by the Nobel committee is great for the parasitology community, according to Colin Sutherland, reader in parasitology at the London School of Hygiene and Tropical Medicine, UK. ‘There was quite a bit of excitement in our corridors when it broke,’ he tells Chemistry World. ‘You can’t underestimate the importance of … the piece of work of the prize winner, Tu, who [could] see a way to go from this herbal medicine that was a bit hit and miss … to a pharmaceutical product that could actually be distributed as a tablet.’

Paul Dyson, head of the Streptomyces genetics group at Swansea University, UK, believes Campbell and Omura’s Nobel prize falls at an important time for global health. ‘I think it’s really, really timely because we really need to discover new antibiotics and, personally, I think the way forward is to adopt Omura’s approach, which is looking for new organisms [that] we can isolate from the environment,’ Dyson says.

It’s a sentiment backed by Rebecca Goss, a bioorganic chemist at the University of St Andrews, UK. ‘Great to see the Nobel prize awarded for the work on avermectin and artemisinin – natural products historically and today continue to provide a wonderful medicinal treasure trove for the treatment of disease.’

Learn more about how Nobel prize winners are selected. Chemistry World talks to former chair of the selection committee for chemistry, Bengt Norden.