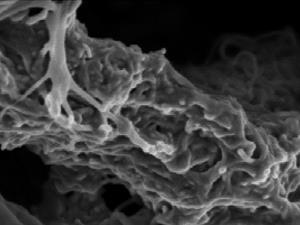 Scanning electrode microscope image of a cross-section of the biocathode

Researchers in France have used compounds extracted from shrimp shells and gardenia fruits to extend the lifetime of medical implants attempting to run on bodily fluids.

Lithium ion batteries, which currently power medical devices such as pacemakers, have a finite life expectancy of up to 5 years. Glucose Biofuel Fuel Cells (GBFC), however, have been proposed as battery-free alternatives that enzymatically catalyse glucose oxidation and oxygen reduction from extracellular fluid, including blood and interstitial fluid, to generate electrical power.

Traditional biocathodes use laccase as the oxidising enzyme but high concentrations of chloride ions within extracellular fluid can impair enzyme activity and shorten the lifetime of GBFC’s. To address these issues, a composite material made from chitosan, a naturally abundant biopolymer found in crustacean shells and mushrooms, genipin, a chemical extracted from gardenia fruit, and carbon nanotubes was developed by Donald Martin, and his team at the University of Grenoble, to encapsulate laccase.

The properties genipin has as a natural cross linker provides additional strength to the chitosan polymer. Coupled with the direct electron transfer from capturing laccase within the matrix, the team have increased the stability of the biocathode.

As an anti-inflammatory, genipin also boosts the biocathode’s biocompatibility. ‘We’ve managed to implant an energy harvesting electrochemical device that can last for up to 6 months in the body of a rat without an immune reaction,’ explains Martin. Compared with previous experiments on laccase biocathodes, which achieved a lifespan of 2 weeks in a snail, the chitosan and genipin polymer is a promising improvement.

Frédéric Barrière, an expert in electroactive systems at the University of Rennes 1 in France, recognises the research as a significant advance. ‘Now the challenge is to demonstrate long term, in vivo implantation of a biofuel cell that is capable of constantly powering an implanted low power microelectronic device.’