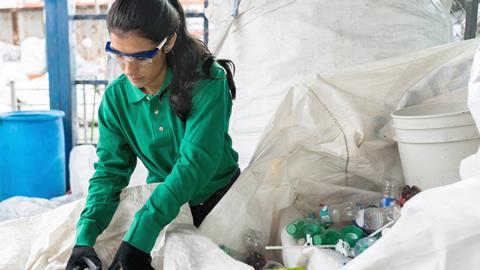 Ring-strain engineered polymers become endlessly recyclable – but are such materials ready to compete with commercial plastics?

Chemically recyclable polymers with thermal stabilities comparable to those of commercial plastics have been created by scientists in the US. The materials can be broken down into their building blocks and then reassembled into new plastic many times over – a dream for sustainable plastics, though one whose commercial reality might still be a long way off.

Key to converting a regular plastic into a depolymerisable one is to fine-tune the cyclooctene monomer’s ring strain. ‘Guided by quantum chemical calculations, we found that installing an additional four-membered ring at the eight-membered cycloalkene would do the trick,’ says Junpeng Wang from the University of Akron, who led the study. His team’s materials are stable up to 370°C and have tuneable mechanical properties.

The team made the materials through ring-opening metathesis polymerisation (Romp) of cyclooctene with a trans-cyclobutane placed at the 5,6-positions. ‘Romp polymers have been limited to those of five-membered cycloalkenes because they have a lower ring strain,’ explains Wang. ‘A drawback of these polymers is that they can only access rubber but not plastic materials. We tried to find cycloalkenes that have a similar ring strain but also allow us to access a broader range of materials.’

Attaching a four-membered ring to the 5,6-positions of a cyclooctene creates a monomer that can be polymerised and depolymerised infinitely

Wang points out that their monomers are prepared in a single step using abundantly available materials. ‘Functional groups on the polymers can be changed by using different feedstocks, so the properties can be tuned to fit different needs.’

‘The [researchers] have identified an interesting chemistry that leverages equilibrium polymerisation thermodynamics – specifically ring strain – to allow a monomer to both polymerise and depolymerise effectively,’ comments Justin Kennemur at Florida State University, US. He says that the route is a great addition to a burgeoning concept in plastics recycling known as chemical recycling to monomer (CRM) – converting polymers back into their chemical feedstock instead of mechanically grinding or melting used plastics into new shapes.

Although the physical properties of such chemically recyclable polymers usually don’t match those of traditional plastics, Wang says that in this case they do. ‘Our materials only depolymerise in the presence of a catalyst. Without it, they are highly stable and can withstand harsh conditions such as heat, acid and base.’ He explains that the double bonds in the polymer’s backbone selectively bind to the catalyst, allowing it to ‘bite’ the material into small pieces.

Yutan Getzler from Kenyon College in the US, who wrote about Wang’s work for Nature Chemistry, calls the results ‘compelling’, especially the team’s approach to understanding what kinds of molecules could work for this process. ‘We are currently using materials that we made kind of by accident,’ he says. ‘They were not designed at all with any sense that there would ever be a need to reuse or recycle them.’

’From the initial characterisation data, the thermomechanical properties look great relative to polystyrene,’ Getzler adds. ‘In terms of the ease of recycling, I would put them in the middle of the pack.’

Wang thinks that polymers such as his could one day replace some of the current plastics, though a number of polymer scientists Chemistry World spoke to said that the monomers’ high cost might make it difficult for them to compete on the market. ‘The preparation is currently at a lab scale, but I believe that through optimisation, the cost of the monomer could be reduced to an acceptable level for large-scale production,’ argues Wang. ‘It will still be difficult to compete with commercial polymers, but the recycling and reuse of the high-value monomers would help to reduce the overall cost in the long term.’

Getzler is enthusiastic about the possibilities CRM can offer to address the plastics crisis. But he agrees that there’s still a long way to go before this kind of approach can make it to the consumer stage. ‘Realistically, we are looking at a 15-to-20-year process to locate what are going to be good replacement materials for the legacy polyolefins.’

Kennemur acknowledges that cost is a major hurdle. ‘More support and effort in research are needed to bring new systems closer to a reality, but I think it will be very exciting if we can make it work.’ Getzler adds that ‘academic discovery-oriented polymer scientists can – and should – begin more regularly utilising tools such as life cycle assessment and technoeconomic analysis to better determine if initial proof-of-concept materials should be pursued more aggressively’.

‘As with global warming, I believe the biggest barriers to solutions that would reach consumers will be the regulatory environment and adaptation of existing infrastructure,’ Getzler points out. ‘I’ll admit that this is pushing the responsibility for this off into an area beyond my expertise, but polymer scientists can only ever solve part of the puzzle.’

‘It’s a multi-tier challenge,’ says Kennemur. ‘But if done correctly, it could be game-changing for a circular plastics economy.’