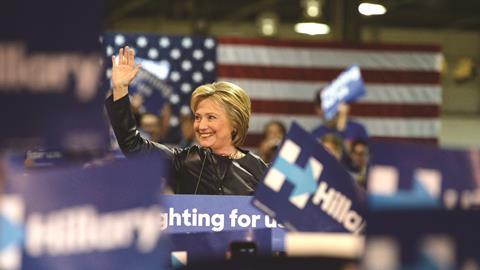 Clinton unveils plans for US science

The presumptive Democratic nominee for US president, Hillary Clinton, has introduced the first substantive discussion of science and technology policy issues into the election by releasing a technology and innovation plan on 28 June. The plan includes a proposal to grow the research budgets of key science agencies like the National Science Foundation, the Department of Energy, and the Pentagon’s Defense Advanced Research Projects Agency.

Clinton notes that US federal funding for research and development (R&D) as a share of the country’s GDP is lower than before the Soviet Union launched Sputnik in 1957. She says increasing funding for these research agencies is key to ensuring that America continues to lead the world in areas like green energy and high performance computing. Clinton also vows to make technology transfer easier and more efficient as president, and she supports setting aside a small portion of federal research budgets for commercialisation capacity building and accelerator grants.

The research community has reacted favourably to Clinton’s plan. ‘We certainly appreciate her support for increased research funding – we think that is essential, and hope that is an idea that will have bipartisan support,’ says Barry Toiv, spokesperson for the Association of American Universities.

Another major feature of the plan is to automatically grant green cards, or permanent residency, to foreign students who earn master’s or PhD degrees in science, technology, engineering, and maths (STEM) fields from accredited US institutions. This would allow such individuals to bypass temporary H-1B work visas. Clinton also supports the introduction of ‘startup’ visas that would allow top entrepreneurs from abroad to come to the US and build companies in technology-oriented globally traded sectors that create jobs. Under her proposal, immigrant entrepreneurs would have to obtain a commitment of financial support from US investors before receiving the visa, and they would have to create a certain number of jobs and reach performance benchmarks in order to pursue a green card.

A statement on Trump’s campaign web site says that US universities graduate two times more Americans with STEM degrees each year than find STEM jobs. ‘The influx of foreign workers holds down salaries, keeps unemployment high, and makes it difficult for poor and working class Americans – including immigrants themselves and their children – to earn a middle class wage,’ the Trump campaign adds. ‘We need companies to hire from the domestic pool of unemployed.’

Ben Corb, spokesman for the American Society of Biochemistry and Molecular Biology, notes that the idea of giving automatic green cards to foreigners who graduate from US institutions with advanced STEM degrees is not a new proposal. It was in fact part of bipartisan legislation introduced in the House of Representatives last year to encourage foreign nationals who have earned such degrees in the US to remain in the country.

That bill went nowhere, and neither did separate bipartisan Senate immigration reform legislation that included a similar proposal last year. ‘It is not controversial, and should be widely accepted,’ Corb says.

However, Republican Jeff Sessions, who chairs the Senate’s Judiciary Committee’s immigration panel, immediately attacked Clinton’s green card proposal. ‘Numerous, well-regarded experts in this field have rejected the narrative that there is a significant shortage of available American workers to fill positions even in the STEM labour market,’ he said in a 28 June statement. Sessions argued that the industry-backed concept of ‘stapling a green card’ to a diploma is driven by the industry’s desire for cheap, young and immobile labour.

In February, Howard University public policy professor Ron Hira testified before Sessions’ subcommitteethat automatic green cards for foreigners who earn STEM master’s and PhDs degrees in the US could create ‘perverse incentives’ in both the labour and educational markets. He suggested that employers will be incentivised to replace their older incumbent workers with cheaper fresh graduates, fuelling age discrimination.

Further, Hira argued that universities would face a potential conflict of interest by becoming the sole gatekeeper for issuing green cards while simultaneously making money from issuing those green cards. Given that Master’s degrees are short in duration, lasting as little as 12 months, and have little oversight from outside bodies, Hira warned that it will become inexpensive for foreigners to purchase green cards from a variety of universities.

But others like former White House Chief Technology Officer Todd Park have expressed a very different sentiment. While serving in the Obama administration, Park noted that every foreign-born graduate with an advanced STEM degree is associated with, on average, 2.6 jobs for American workers.

Further, Park cited results from a survey of US-based Nobel laureates over the past 50 years indicating that 26% were foreign born. By some estimates, he said, immigration was responsible for one-third of the growth in patenting in past decades, and these innovations contributed to increasing America’s GDP by 2.4%.