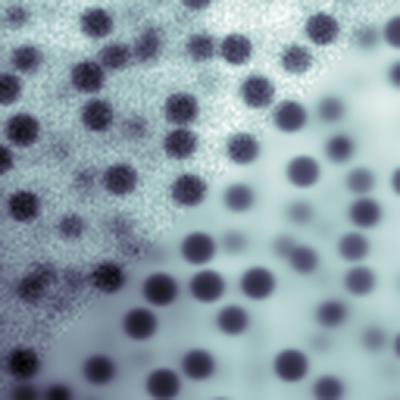 Cornell University, US, scientists have devised a way to overcome frustrations researchers can face with high resolution microscopy techniques that aren’t precise enough. Itai Cohen and James Sethna’s teams boost colloid image precision 10–100-fold in under a day, by comparing images with computer reconstructions costing around $0.10 (£0.08) an hour to run. The approach is ‘a universal method of scientific image analysis that extracts all the useful information theoretically contained in a complex image’, the Cornell teams claim.

The researchers developed the parameter extraction from reconstructing images (Peri) method after struggling to track spherical colloid particle movement. Although using confocal microscopy provided sufficient resolution to see the small particles they were interested in, poor precision meant the researchers were uncertain about their size and position.

To maximise precision, Cohen’s student Brian Leahy, who specialises in microscopy, worked with Sethna’s student Matthew Bierbaum, a theoretician. To identify the origins of the imprecision and find ways to describe and reconstruct them mathematically they had to ‘pound their brains heroically’, according to Cohen.

Bierbaum and Leahy had to search carefully through all the problems that might affect the image, selecting only those that are truly important to precise measurements. For example, they discarded the effect of particles moving while the microscope scanned across their sample because they found it was smaller than the precision level they could theoretically reach.

But the PhD researchers did find that aberrations in the microscope’s lens that cause light shining on the sample to blur in a ‘point spread function’ were important. So too were imperfections in distribution of the fluorescent dye mixed into the sample, stripes in the illuminating light itself and background noise. Leahy and Bierbaum then devised individual mathematical reconstructions of the problems, each one taking on a starkly different formulae.

The images in the resulting reconstructions involve 10 million pixels and 6000 variables, including the three-dimensional co-ordinates of every particle in the sample. And to study their sample in detail, they needed to reconstruct thousands of images. That may sound fearsome, but Cohen says that laying the groundwork is the hard part, while the image processing that follows becomes routine. It requires up to a day of computer time on a combination of Cornell computers and an Amazon cloud mainframe, costing a few dollars, to analyse each image. ‘That’s trivial for modern-day laboratories, and then to increase precision by a 100-fold, that’s really phenomenal,’ Cohen enthuses.

Peri enabled the Cornell scientists to measure colloid particles’ radii, which had been very difficult, down to nanometre precision, Cohen adds. They were therefore able to confirm values of an electrostatic potential acting between the particles on these nanometre scales. However, the implications are much broader. ‘You could think about doing this with any microscope,’ Cohen stresses.

Harvard’s Vinothan Manoharan agrees that Peri is broadly applicable, but notes that it would need to be modified, potentially substantially. One of its strengths is that it requires many fewer choices about how to clean-up images than existing processing techniques, he adds. ‘That simplifies the process, and it makes the results less sensitive to the particular choices of the person doing the analysis, which is important for reproducibility,’ Manoharan says.

Klaas Wynne from the University of Glasgow, UK, observes that Peri is not as significant an invention as techniques that have enabled scientists to pick out features below the diffraction limit. It does extract the maximum amount of information possible, but doesn’t increase the resolution of the image, he stresses.

Leahy is now applying the technique to transmission electron microscopes in Manoharan’s team, and Sethna’s group is looking at superconducting quantum interference device microscopy. Meanwhile, Cohen’s group is ‘applying these techniques like crazy to colloidal suspensions’. The scientists have also made their reconstruction code available open source, so other confocal microscopists can apply it. ‘It’s going to take some tinkering for people to apply this to their own microscopes,’ Cohen says, ‘but it’s basically done.’