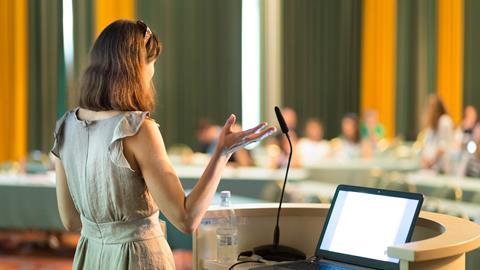 To increase diversity and inclusivity in the chemical sciences, the Royal Society of Chemistry (RSC) has put in place new requirements for the events it supports, beginning in 2020. The plan is to broaden the type of speakers, chairs and attendees at all RSC events to better reflect the current gender balance of the chemical science community. In future, women will have to comprise at least a third of the speakers and chairs at RSC-sponsored events. ‘Events from organisers who fail to comply with this target will not be supported financially nor associated with the RSC brand,’ explained Jo Reynolds, the RSC’s director of science and communities.

Exceptions to the new policy will only be considered with a written explanation providing details why event organisers could not meet the targets. This statement will need approval by the RSC or the event will not be funded.

Earlier this month, the RSC released a gender bias report that analysed the authors of roughly 700,000 submissions to the organisation’s 40-plus peer reviewed journals, and found that less than 36% are women. The RSC’s recent diversity landscape report found that just 9% of chemistry professors in the UK are women, and the proportion of female chemists falls rapidly from undergraduate level – where they make-up 44% of chemistry students – to senior academic positions. Later in 2018, the RSC also released a Breaking the barriers report showing that ‘99% of female chemists in UK academia can evidence the lack of retention and progression of women’.

‘Our Breaking the barriers report highlighted that visibility and opportunities to network have an impact on women’s retention and progression,’ Reynolds tells Chemistry World. ‘We know that 36% of our publishing community are women, but we don’t always see this level of representation at all RSC events. So we are taking the lead in ensuring that this happens.’ Creating visibility on high profile platforms sends ‘an important signal that there are opportunities for everyone’, she says, urging others in the scientific community to follow suit.